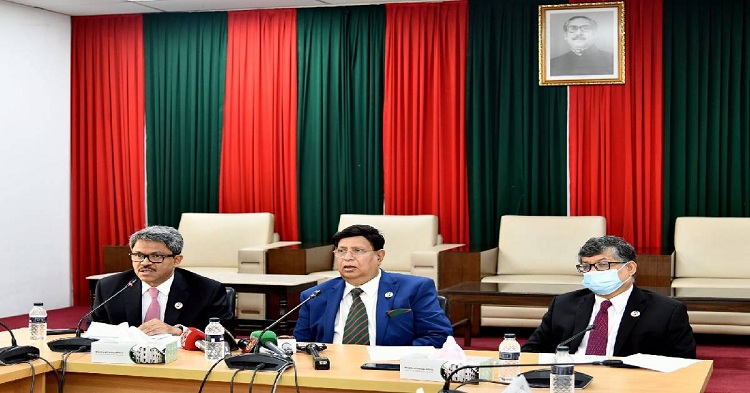 President Abdul Hamid will inaugurate the “World Peace Conference-2021” on December 4 that will bring together global thinkers, political personalities and peace promoters.

The conference aims at infusing momentum in peace diplomacy and looking back on Father of the Nation Bangabandhu Sheikh Mujibur Rahman’s vision and political struggle for peace, reports UNB.

Prime Minister Sheikh Hasina will attend the closing ceremony of the two-day conference on December 5. Both the President and the Prime Minister will join the event virtually.

Bangladesh is hosting the World Peace Conference as a part of its celebrations of the Mujib Year, the birth centenary of the Father of the Nation Bangabandhu Sheikh Mujibur Rahman and the Golden Jubilee of the Independence of Bangladesh.

The conference, to be held in a hybrid format, will also shed light on the legacy being carried forward by Prime Minister Sheikh Hasina in her “untiring quest” of building a peaceful, just, rights-based, inclusive and prosperous nation.

“Bangladesh will get a special document through adoption of – Dhaka Peace Declaration – which will work as a reference for Bangladesh’s all peace and security-related global initiatives to be taken in the future,” Foreign Minister Dr AK Abdul Momen said while briefing reporters at the Ministry of Foreign Affairs on Wednesday.

Dr Momen said Bangladesh did not invite any head of states or governments to the conference but invited peace activists, writers, poets, singers and civil societies from different countries to join the conference for promoting a culture of peace and tolerance.

State Minister Alam said some invited guests converted their participation into virtual one due to new reality amid new Covid-19 variant though they initially planned to join in person.

The guests who were scheduled to come from South Africa will now join virtually.

On the occasion of 50 years of Independence and the birth centenary of the Father of the Nation Bangabandhu Sheikh Mujibur Rahman, Bangladesh celebrates five decades of its peace-centric diplomacy aimed at promoting sustainable development, fundamental rights and freedoms, and social justice and inclusion.

The idea of holding the conference is to let the world feel that peace has to be cherished in multifarious ways perceiving that the invaluable contributions of the global pioneers are universal, and that peace will be sustainable only through social justice, equity and inclusiveness, the government said.

During the conference, a number of panel discussions will be held which will be participated by the intellectuals, educationists, eminent personalities and people of high stature of the world who are dedicated to establishing peace in the world.

The conference will be concluded with “Dhaka Peace Declaration, 2021”.

It is expected that the conference will offer an opportunity to the people around the world to share the bright ideas of the distinguished discussants and be able to impart those ideas in their respective countries with a view to achieving a sustainable global peace.

Earlier, a 46-member committee was formed with Speaker Dr Shirin Sharmin Chaudhury as its chair and Saima Wazed Hossain as its member secretary to successfully host the World Peace Conference.

The in-person sessions of the conference will be held in Hotel InterContinental, Hotel Sonargaon and Foreign Service Academy.

The inaugural and closing ceremony will be held in InterContinental while panel discussion will be held at Foreign Service Academy.

The participating guests will visit a number of places of historical importance including Bangabandhu Memorial Museum at Dhanmondi-32.