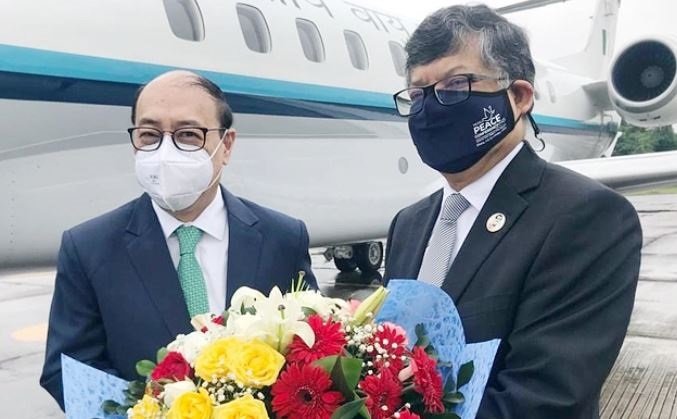 Indian Foreign Secretary Harsh Vardhan Shringla is now in Dhaka on a two-day visit as India officially announced its President’s state visit to Bangladesh from December 15-17.

Foreign Secretary Masud Bin Momen received his Indian counterpart Shringla upon his arrival on Tuesday morning by a special aircraft.

Though the Indian government is yet to announce the name of the chief guest for its Republic Day parade that falls on January 26, it could not be known whether Shringla is carrying any message or special invitation from Indian Prime Minister Narendra Modi for his Bangladesh counterpart.

The Indian Foreign Secretary is scheduled to meet the Prime Minister on Wednesday.

India’s relationship with Bangladesh is one of the strongest pillars of its “Neighbourhood First Policy”, said the Indian Ministry of Foreign Affairs.

In this special year, Bangladesh and India are jointly commemorating 50 years of the establishment of their diplomatic ties.

The Foreign Secretary’s visit to Bangladesh, a day after the Maitri Diwas celebrations, will provide an opportunity to review the wide-ranging cooperation between the two countries, MEA said.

The visit will also help prepare for the State visit of President of India Ram Nath Kovind to Bangladesh from December 15 to 17.

Earlier, Indian Prime Minister Narendra Modi had paid a State visit to Bangladesh from March 26 to 27, 2021 to join the celebrations of the Golden Jubilee of the independence of Bangladesh, the birth centenary of Father of the Nation Bangabandhu Sheikh Mujibur Rahman and 50 years of establishment of diplomatic relations between India and Bangladesh.

During his visit here, Prime Minister Modi extended an invitation to Prime Minister Sheikh Hasina to visit India in 2022 in commemoration of the Golden Jubilee of the establishment of diplomatic relations.

On Monday in New Delhi, the Indian Foreign Secretary said India will cooperate increasingly with Bangladesh, noting that the next 50 years of two countries’ shared journey will bring even greater satisfaction for both sides.

Loosely translated, he said, this Maitri Diwas means ‘Friendship Day” but ”Maitri” has a much deeper connotation.

“It’s a relationship that has a depth, and has a significance beyond the ordinary. It’s a bond that has stood the test of time,” Shringla said at a discussion “Maitri Diwas, 50th Anniversary of India-Bangladesh Diplomatic Relations” held in New Delhi.

The upcoming state visit of Indian President Ram Nath Kovind to Bangladesh on this historic occasion is a reflection of the high priority that both countries attach to the bilateral relationship, says the Indian Ministry of External Affairs (MEA).

“It also reaffirms the shared desire of both countries to further consolidate and strengthen the multifaceted and irreversible partnership, based on historical and cultural ties, mutual trust and understanding,” the MEA said in a statement officially announcing the state visit of Indian the President to Bangladesh on December 15-17.

At the invitation of President Abdul Hamid, the President of India will pay the state visit to attend the 50th Victory Day celebrations of Bangladesh.

“Bangladesh is a major pillar of India’s Neighbourhood First Policy,” said the MEA.