Dhaka-Delhi could be benefitted by generating hydropower in Nepal, Bhutan: PM 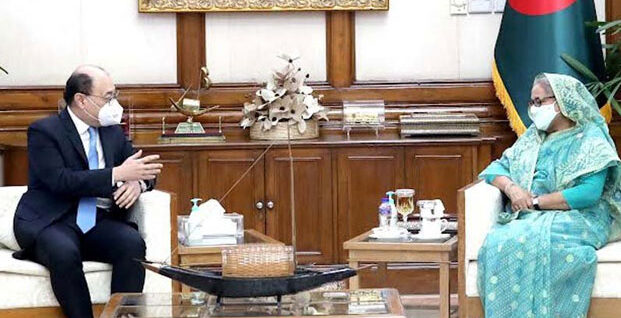 Prime Minister Sheikh Hasina on Wednesday said Bangladesh-India could be benefited by generating hydro-power in Nepal and Bhutan as it will be a clean energy and cheaper also.

“Both the countries could be benefitted from the hydro-power generation in Nepal and Bhutan,” she said this while visiting Indian Foreign Secretary Harsh Vardhan Shringla paid a courtesy call on her at her official residence Ganabhaban this morning, reports BSS.

Harsh Vardhan Shringla said some small issues across the border between Bangladesh and India can be settled down through holding meetings between Border Guard Bangladesh (BGB) and Border Security Force (BSF).

“Bangladesh and India have settled down all major issues while some small issues along the border between the two countries can be solved through holding meetings between BGB and BSF,” he said, adding, “We want that this issue will be resolved.”

The Prime Minister also agreed on it, said the Press Secretary.

The Indian Foreign Secretary said normalcy is coming back to India after recovering from the setback of COVID-19 pandemic.

He said that all are cautious about Omicron variant of the COVID-19 as some 21 cases have been detected so far in India.

He also mentioned that COVID-19 has been mutated 15 times before transforming into the Omicron variant.

Shringla said the variant has been detected in many countries in Europe apart from the African countries.

He conveyed greetings of Indian Prime Minister Narendra Modi to the Bangladesh Prime Minister and she also greeted her Indian counterpart through the Indian Foreign Secretary.

Shringla appreciated the economic progress of Bangladesh during the COVID-19 pandemic and said that there is good growth in India also.

He thanked her for inviting Indian President Ram Nath Kovind in the 50th Victory Day celebration programme and termed it as a “special bond of friendship”.

“Too much progress has been made under the leadership of both Prime Ministers of India and Bangladesh,” he said.

The Foreign Secretary also said India will observe the commemoration of the Birth Centenary of the Father of the Nation, Golden Jubilee of Bangladesh’s Independence and 50th anniversary of establishment of Bangladesh-India diplomatic relation across the globe in their missions and will project Bangabandhu among the local people of the respective countries.

Shringla expected to hold a joint photo exhibition on Bangabandhu by India and Bangladesh at the United Nations after the COVID-19 situation is improved.

He said that India wanted to invest in renewable energy in Bangladesh.

She recalled the days of her captivity with other family members during the liberation war and mentioned that Indian recognition has overwhelmed them.

She also mentioned that in Bangladesh 99 percent people are under electricity coverage. “The government is providing solar energy where there is no grid line,” she said.

The meeting was attended by Indian High Commissioner to Bangladesh Vikram Kumar Doraiswami and Policy Adviser in the Ministry of External Affair Ashok Malik from the Indian side while Principal Secretary Dr Ahmad Kaikaus from the Bangladesh side.