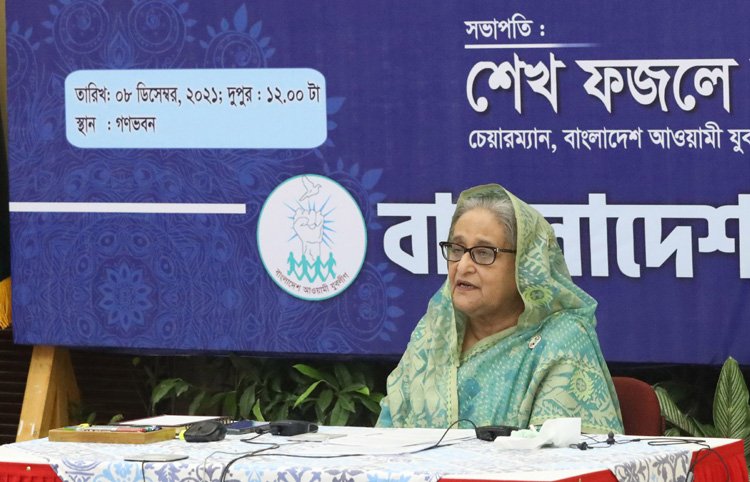 Prime Minister Sheikh Hasina today stressed the need for preparing the young generation with the spirit of the Liberation War and ideal of the Father of the Nation Bangabandhu Sheikh Mujibur Rahman aimed at building a non-communal, knowledge-and science-based progressive society to lead the country towards development and prosperity, urging the Jubo League to take the leading role in this regard.

“We want to prepare the young generation to take Bangladesh ahead in future,” she said while addressing a discussion marking the 49th founding anniversary of Bangladesh Awami Jubo League from her official Ganabhaban residence here through a video conference.

Against the backdrop of the demand of the BNP leaders to send Khaleda Zia abroad for treatment, the Prime Minister said they have shown the highest sympathy to the BNP chairperson by allowing her to stay home and take the country’s best treatment despite the fact that she was convicted for embezzling orphan’s money and giving patronage to the killers of Bangabandu, deliberately celebrating her fake birthday on August 15, giving no scope for treatment of ailing political leaders and making several attempts on her life.

She asked the BNP leaders: “What are they expecting from us? We have allowed her to stay home and take treatment freely in the country’s best hospital. Isn’t it enough? Isn’t it a great generosity? We’ve shown it (generosity). How more (I would do)?”

Sheikh Hasina, also president of the Awami League, asked the Jubo League leaders and workers to devote themselves in serving the people and create an atmosphere so that the future generation could get a beautiful life in the future.

Mentioning that the youths took the leading role in each of the democratic movements, the Prime Minister said that they had dedicated the 2018 election manifesto of the Awami League by selecting the slogan “Development of youths lead to prosperous Bangladesh.”

Sheikh Hasina said her government has taken multifaceted programmes, including generating employment and giving training in various fields and creating scope of taking loans without collateral so that they could stand on their own feet and create jobs for others shunning the chase after jobs.

“Our target is that the young generation would work to take Bangladesh ahead,” she continued.

The Prime Minister highly appreciated the speech of the Jubo League Chairman Sheikh Fazle Shams Parash saying that if the leaders and activists of the organization can realize the speech of their chief and work accordingly, the future of Bangladesh will be very bright.

“If it is possible to build Bangladesh with the ideology of Father of the Nation Bangabandhu Sheikh Mujibur Rahman and the spirit of the Liberation War, the country will march towards a developed and prosperity maintaining the current socio-economic advancement of Bangladesh,” she said.

The Prime Minister also inaugurated distribution of 61 houses, built by the Jubo League, among the homeless people as part of the government’s move to bring all the homeless and landless people under the housing scheme.

Referring to birthday celebration by Khaleda Zia on August 15, Sheikh Hasina said, “What is the meaning of celebrating birthday by cutting cake on August 15? It is to hurt us who lost parents, brothers and children. Isn’t it? Khaleda Zia celebrates August 15 as her birthday. If so, how can they expect more from me?”

The Prime Minister said that Khleda Zia mentioned several dates as her birthday in different documents.

She said Khaleda Zia rewarded and patronized the killers of the Father of the Nation.

Khaleda Zia had brought a killer of Bangabandhu to parliament as the opposition leader after 1996 farcical election, she said.

BNP leaders are now taking about Khaleda Zia’s treatment abroad though she was a convict in graft case, she said, adding that they must remember that Khaleda Zia did not allow former army chief general Mustafizur Rahman to receive treatment in the CMH, and denied treatment facilities to HM Ershad in jail, his wife Raushon Ershad and Matia Chowdhury, and unleashed tortures on AL leaders, including Bahauddin Nasim.

“The BNP leaders now want sympathy and cooperation (from us). But I would like to ask them how Khaleda Zia behaved (with us). What were the remarks of Khaleda Zia before the August-21 grenade attack?” she said.

Referring to Khaleda Zia’s remark that Sheikh Hasina would never be even the opposition leader let alone the Prime Minister and Awami League would not go to power even in 100 years, the premier said the destiny is that Khaleda Zia has now failed to become an opposition leader.