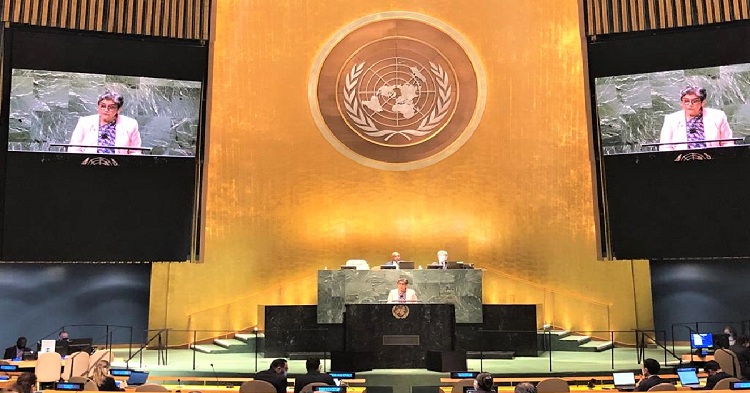 The United Nations (UN) has unanimously adopted Bangladesh’s flagship resolution on the ‘Culture of Peace’.

The Permanent Representative (PR) of Bangladesh to the UN, Ambassador Rabab Fatima, introduced the resolution in the General Assembly on Thursday, reports UNB.

Ambassador Fatima said that “the resolution this year assumes greater relevance and urgency as they continue to grapple with the unprecedented, multifaceted challenges posed by the Covid-19 pandemic”.

The resolution was first adopted on 13th September 1999, during the first tenure of Prime Minister Sheikh Hasina.

Since then, Bangladesh has been facilitating this resolution in the Assembly every year and also convening a high-level forum on the Culture of Peace at the Assembly.

This year’s high-level forum which was held on 7th September 2021, focused on the transformative role of the Culture of Peace in promoting inclusion and resilience in the post-Covid recovery.

The resolution focused on Covid-era realities, such as rising inequalities in income, opportunities, access to ICTs, health coverage, social protection, and new challenges in healthcare services and vaccines, deepening gender inequality, and a surge in hate speech, stigmatisation, racism and xenophobia, which all stand to jeopardise peace.

It also stressed on the need to promote the values of tolerance, non-discrimination, pluralism and freedom of opinion and expression, and also to address hate speech narratives.

Bangladesh’s PR said that the resolution has over time, grown in relevance, and evolved into a dominant theme finding larger footprints and recognition in all major UN discourses.

“In the rapidly changing global situation, it has proved to be a useful means to complement UN Charter obligations of maintaining peace in the world”, she added.

This year, 109 countries from a cross-regional representation of the UN member states co-sponsored this resolution, showing broad-based support for the notion of the Culture of Peace.