Govt to prepare guidleline on booster dose of Covid-19 vaccine 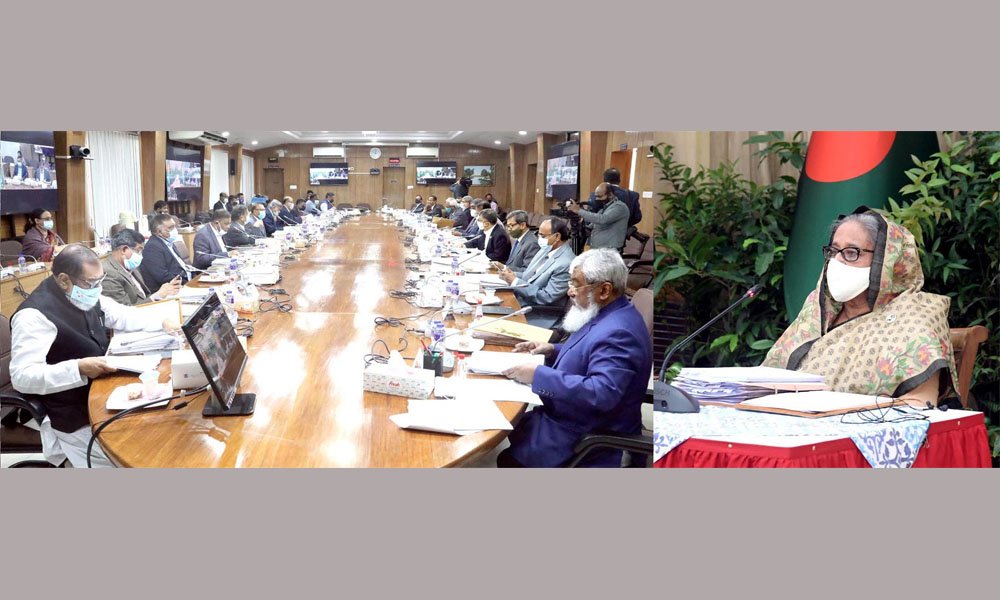 The Cabinet on Monday directed the authorities concerned to work on a precise guideline on the booster dose of Covid-19 vaccine in the country against the backdrop of rapid transmission of new variant “Omicron”.

The directive came at the regular Cabinet meeting with Prime Minister Sheikh Hasina in the chair held at the meeting room of the Cabinet division.

She joined the meeting virtually from her official residence Ganabhaban, while other ministers and officials concerned were connected from the Bangladesh Secretariat, BSS reports.

“The National Technical Advisory Committee on Covid-19 and the Health Ministry were instructed on it so they would remain ready for whether the booster dose would be given free or on payment and submit a guideline following discussions,” said Cabinet Secretary Khandker Anwarul Islam while briefing reporters in the Secretariat after the meeting.

He said the Cabinet asked all to remain careful about Omicron as the new variant of Covid-19 is spreading rapidly across the world.

“The Prime Minister repeatedly said that we’ve to be very careful,” he added.

The Cabinet secretary said the Primer earlier also instructed the technical committee to work on a precise guideline when the booster dose campaign needs to be started.

He continued since the world renowned scientists recommended for the booster doses to remain immune from the Covid-19, the meeting asked to pay special attention over how the booster doses can be rolled out in Bangladesh.

Noting that two persons were detected with Omicron in Bangladesh, Anwarul Islam said both of them are from Bangladesh Cricket Board, who entered the bio-secure bubble at Hotel Pan Pacific Sonargaon, directly from the Airport. The two persons didn’t come in close contact with anyone in the airport and their family members and any others, he said.

The cabinet secretary said that he has got a complete protocol over Omicron from his close friend and his spouse who are senior consultants in South Africa.

In the protocol, they said the variant spreads rapidly and its effect is not as dangerous as that of Delta strain, he added.

In today’s meeting, the Cabinet cleared the draft speech of President Md Abdul Hamid to be delivered in the first session of Parliament in the new year of 2022, he said.

The Cabinet gave the final approval to the draft of Payment and Settlement Systems Act, 2021 in order to have a precise law instead of regulations.

“Now there is no precise law here, the systems are run on the basis of different regulations. Since the digital transactions now are made as well, the draft law was placed,” said the Cabinet Secretary.

The draft of International Centre for Diarrhoeal Disease Research, Bangladesh Act, 2021 in order to repeal the military regime ordinance over the icddr,b in line with a verdict of the higher court.

The Cabinet also endorsed the list of duty-free goods and certificate of origin for other member countries under D-8 Preferential Trade Agreement (PTA).

In addition, the draft amendment to the ratified agreement to be signed between Bangladesh and the Maldives for the avoidance of double taxation and prevention of tax evasion was also approved.

Anwarul Islam said two countries brought the changes to the clause 28 of the agreement following discussions. The Prime Minister will visit the Maldives on December 22 and 23 next when a trade agreement is likely to be signed, he said.

The Cabinet was informed about the visit of Bangladesh delegation-led by Prime Minister Sheikh Hasina to the United Kingdom to participate in the COP-26 held in Glasgow on November 1 and 2 last.

Besides, it was also informed about the Prime Minister’s visit to London and Paris from November 03 to November 13 last.