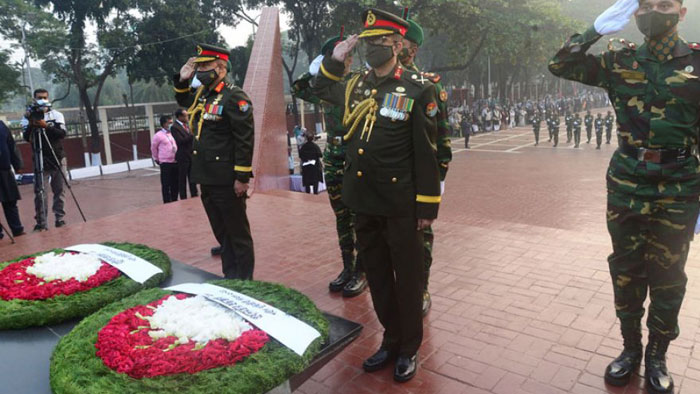 On behalf of the head of the state, his military secretary Major General S M Salah Uddin Islam placed wreath at the monument this morning to pay tributes to those who lost lives days before Bangladesh’s final victory in the War of Liberation in 1971.

Meanwhile, On behalf of the premier, her Military Secretary Major General Naqib Ahmed Chowdhury laid the wreath around 7.05am.

The day is being observed on a limited scale due to Covid-19 situation, reports BSS.

Just two days ahead of the country’s final victory for independence on this day 50 years back, the Pakistani occupation forces with the help of their local collaborators – Razakar, Al-Badr and Al-Shams – killed the most prominent intellectuals of the country.

As many as 200 illustrious sons of the soil, including professors, journalists, doctors, artistes, engineers and writers, were abducted from their respective residences blindfolded during December 10 to 14 in 1971.

They were first taken blindfolded to torture cells at Mirpur, Mohammadpur, Nakhalpara, Rajarbagh and other clandestine locations in different parts of the city.

Subsequently, they were put to death en masse at different killing grounds, most notably Rayerbazar and Mirpur, in a bid to cripple the newly emerging Bangladesh intellectually.

Since then, the day is being observed as the Martyred Intellectuals Day.