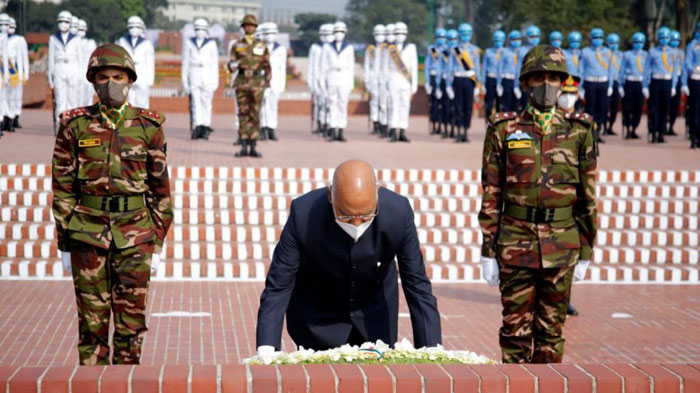 The visiting Indian President Ram Nath Kovind on Thursday paid glowing tributes to the memory of the martyrs of the Liberation War in 1971 at the National Memorial in Savar on the outskirts of the capital.

Kovind reached the National Memorial boarding on a helicopter at about 12:25 pm and paid homage to the national heroes by placing wreath there, reports BSS.

A smartly turned-out contingent drawn from Bangladesh Army, Navy and Air Force gave him a guard of honour while the bugles played the last post.

The Indian President planted a sapling of “Ashok Tree” on the memorial premises and signed the visitors’ book on the occasion.

Strict security measures were taken at the memorial and its adjacent areas ahead of his visit there.

Earlier, Kovind arrived in the capital this morning on a three-day official visit to join the grand celebrations of the golden jubilee of the country’s independence and the birth centenary of Father of the Nation Bangabandhu Sheikh Mujibur Rahman.

A special Indian Airlines flight carrying Kovind and his entourage members landed at Hazrat Shahjalal (R) International Airport (HISA) here at 11:10 am (BST) in the morning.

President M Abdul Hamid along with his wife Rashida Khanam received his Indian counterpart with a bouquet at the airport in the city.

In his maiden tour to Dhaka, Kovind is being accompanied by Indian first lady Shrimati Savita Kovind and their daughter Swathi Covind, India’s education minister and two parliament members alongside several senior officials.

The 14th Indian president is the only foreign dignitary participating in the event of December 16 here at the invitation of his Bangladesh counterpart Abdul Hamid to represent India at the celebrations as a guest of honour.

This is the first foreign visit of Kovind since the Covid-19 onset.