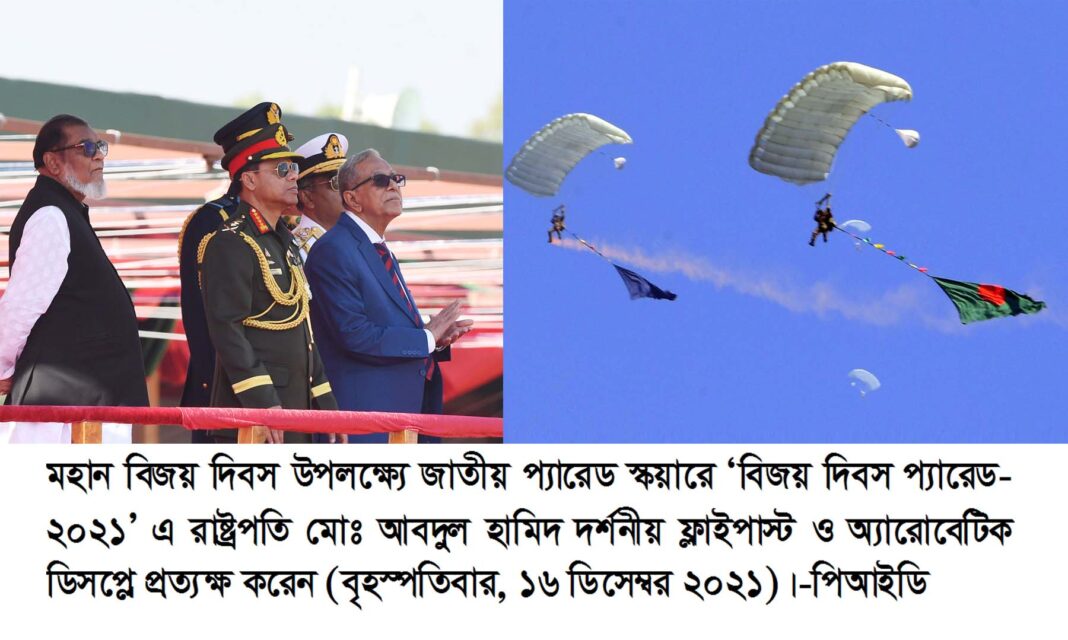 Bangladesh on Thursday staged an extravagant Victory Day parade coinciding with the Golden Jubilee Celebrations of 1971 Independence from Pakistan with President M Abdul Hamid taking the salute while his Indian counterpart Ram Nath Kovind joining the ceremony along with Prime Minister Sheikh Hasina.

Military contingents from three foreign countries – India, Russia and Bhutan – joined the parade, the first ever participation of foreign troops in the Victory Day ceremony since Bangladesh’s independence alongside Bangladesh forces.

The contingents of the three countries took part in the march-past while their own military music bands as their officers led the troops and saluted the Bangladesh president.

The United States and Mexico sent military observer groups which too took part in the parade at the National Parade Ground, BSS reports.

President M Abdul Hamid, also supreme commander of the armed forces, took the salute at the ceremony from a saluting dais while Kovind, as the guest of honour, witnessed the event along with Sheikh Hasina.

The parade was organized and conducted by the 9th Infantry Division of Bangladesh Army under the supervision of Armed Forces Division with the directives of the Ministry of Liberation War Affairs.

Twenty three contingents of Bangladesh’s army, navy, air force and different other paramilitary units as well as non-military and utility services and ministries joined the parade.

The armed forces also displayed their defence hardware and weaponries in the ceremony at the National Parade Square alongside the march-past and the air-past, when the fighter jets and helicopters displayed their manoeuvring performances in the air.

President Abdul Hamid, accompanied by Prime Minister Sheikh Hasina, also exchanged greetings with the commanders of the contingents who took part in the parade before departing from the ground.

Apart from this, the nearby road of the parade ground was also decorated with banners and festoons highlighting the spirit of the Liberation War and the Victory Day.

Later, a well-decorated motorcade of mechanized column of different ministries and departments of the government also ensured their presence on the parade ground.

At last stage of the programme, a spectacular aerobatic display was exhibited on the occasion.

Kovind is the lone foreign head of state to join the celebrations while Dhaka rolled out a red carpet as he arrived on Wednesday on a three-day visit along with his wife and daughter with a delegation.

Bangladesh invited him to the celebration as New Delhi extended its crucial support during the 1971 Liberation War while on this day in 1971 the defeated Pakistani troops unconditionally surrendered to Bangladesh-India allied force.

India was the second country to recognize Bangladesh after Bhutan while on December 16 evening, the then Prime Minister Indira Gandhi announced the development in Indian parliament saying “Dhaka is now the free capital of a free country”.

Thousands of people from all walks of life also witnessed the spectacular parade that lasted for over two hours.

Earlier, on his arrival along with his wife Rashida Khanam at the parade venue at about 10:30 am, Abdul Hamid was received by Prime Minister Sheikh Hasina, Liberation War Affairs Minister AKM Mozammel Haque, parliament members and the chiefs of the three services and senior officers of armed forces division.

Fifty years back, the country achieved victory through the nine-month War of Liberation against Pakistani occupation forces on this day.

On this day in 1971, Pakistani military conceded defeat to the allied forces and commanding officer of Pakistani forces general A A K Niazi surrendered arms with all members of his forces.