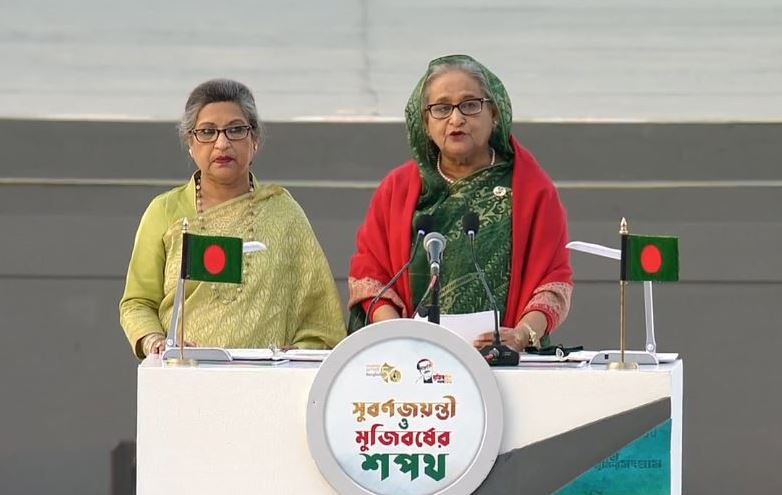 Prime Minister Sheikh Hasina on Thursday urged all to make a vow of deploying their full strength to build the country as a developed, prosperous and non-communal “Sonar Bangla” being imbued with the ideology of Father of the Nation Bangabandhu Sheikh Mujibur Rahman.

“Today, on the occasion of golden jubilee of the country’s independence and the Victory Day of Mujib’s year, I swear with a strong voice that I will not let the blood of martyrs go in vain, I will love the country, and I will deploy all my strength for the overall welfare of the people of the country,” she said while administering the oath at the South Plaza of the Jatiya Sangsad Bhaban in Dhaka, BSS reports.

People from all walks of life across the country also made the pledge to build “Sonar Bangla” echoing the voice of Prime Minister Sheikh Hasina, joining the ceremony virtually via social media, television and other means.

Sheikh Rehana, younger daughter of the Father of the Nation Bangabandhu Sheikh Mujibur Rahman, took the oath standing beside her elder sister and Prime Minister Sheikh Hasina on the dais.

The premier read out the oath – “Under the leadership of Father of the Nation Bangabandhu Sheikh Mujibur Rahman, Bangladesh has achieved independence through a long bloodstained liberation struggle against the exploitation and deprivation of the then Pakistani rulers. The Bengalee nation has established its distinct ethnicity in the world.”

She said, “Being imbued with the ideology of Father of the Nation Bangabandhu Sheikh Mujib, I will turn Bangladesh into a developed-prosperous and non-communal ‘Sonar Bangla’. Almighty Allah may help us.”

Sheikh Hasina said to the countrymen, “We will build our beloved motherland as Sonar Bangla, we will continue to move ahead raising our heads as a prosperous and victorious nation in the world.”

She said Bangabandhu, in his historic March 7 Speech, asked the people of Bangladesh to turn every home into a fortress, remain ready to confront the enemies with whatever they had, as well as to form Sangram Parishad immediately under the leadership of Awami League in every village, union, sub-district and district.