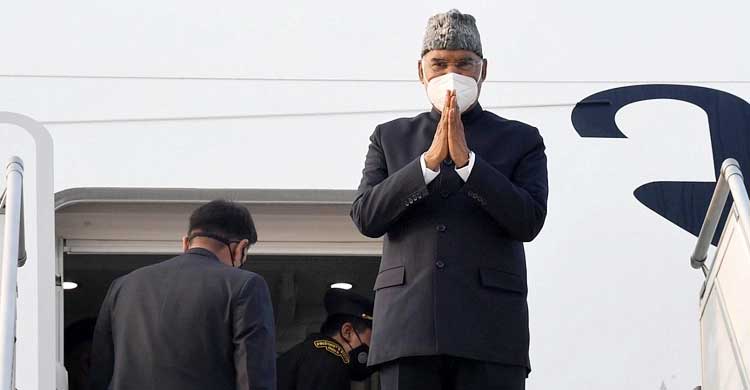 Indian President Ram Nath Kovind wrapped up his three-day state visit to Bangladesh on Friday that saw a slew of announcements.

The visit was of “historical significance”, given the 50th anniversary of the shared sacrifices of the people of the two countries during Bangladesh’s struggle for liberation in 1971.

This was the Indian President’s maiden visit to Bangladesh and also his first visit overseas since the outbreak of the Covid-19 pandemic.

Dr Subhas Sarkar, Minister of State for Education, and Rajdeep Roy, Member of Parliament (Lok Sabha) were part of the presidential delegation.

In March this year, Prime Minister Narendra Modi too paid a landmark state visit to Bangladesh.

The key announcements made during the President’s visit included gifting of the Bangabandhu-Bapu Digital Exhibition to the Liberation War Museum in Dhaka; announcement of the first occupant of the Bangabandhu Chair at Delhi University; and extension of the Nutan India-Bangladesh Maitree Muktijoddha Sontan Scholarship Scheme for five years.

A 1971-era MiG-21 aircraft was gifted to the National Museum of Bangladesh. A replica of the aircraft was also handed over by the Indian President to his Bangladeshi counterpart.

On Friday, the Indian President inaugurated the newly reconstructed ‘Sree Sree Ramna Kali Mandir’ in Dhaka, that had been destroyed in March 1971 by Pakistani forces.

In keeping with the spirit of the occasion, he also interacted with Indian war veterans and Muktijoddhas of Bangladesh.

He later addressed a gathering of friends of India representing different walks of life from the Bangladeshi society and members of the Indian community.

President Kovind commenced his visit by paying homage to the martyrs of the Liberation War at the National Martyrs’ Memorial at Savar.

He also paid his respects to Sheikh Mujibur Rahman and his family members at the Bangabandhu Memorial Museum.

On December 15, the President held delegation level talks with President Abdul Hamid, wherein both sides took stock of the progress in bilateral relations and discussed ways to further deepen cooperation for the benefit of the people of the two countries.

Prime Minister Sheikh Hasina called on the Indian President and recalled the historic visit of Prime Minister Modi to Bangladesh in March 2021.

The leaders highlighted the importance of the spirit of 1971 and the legacy of Bangabandhu Sheikh Mujibur Rahman.

Foreign Minister Momen also called on the President and updated him about the ongoing bilateral cooperation.

On December 16, the President attended the Victory Day parade in Dhaka as the guest of honour. A 122-member tri-service contingent of the Indian Armed Forces also participated in the parade.

In remembrance of the bravery and the supreme sacrifices made by the Indian Armed Forces during the 1971 Liberation War of Bangladesh, Wing Commander T Asha Jyotiramai performed a para jump unfurling the flag of the Indian tri-services along with the paratroopers from the Bangladesh Armed Forces at the parade.

In the evening, the President delivered an address at a special event held to mark the Golden Jubilee of the Independence of Bangladesh and culmination of “Mujib Borsho” at the South Plaza of the Bangladesh Parliament in the presence of President Hamid and Prime Minister of Bangladesh and other dignitaries.

India’s relationship with Bangladesh is one of the main pillars of its ‘Neighbourhood First’ and ‘Act East Policies’, said Indian Ministry of External Affairs.

The visit of the President of India to Bangladesh on the historic occasion of the 50th Victory Day is testimony to the high priority that both countries attach to each other and their desire to further strengthen this ties based on shared values, mutual trust and understanding, the MEA said.