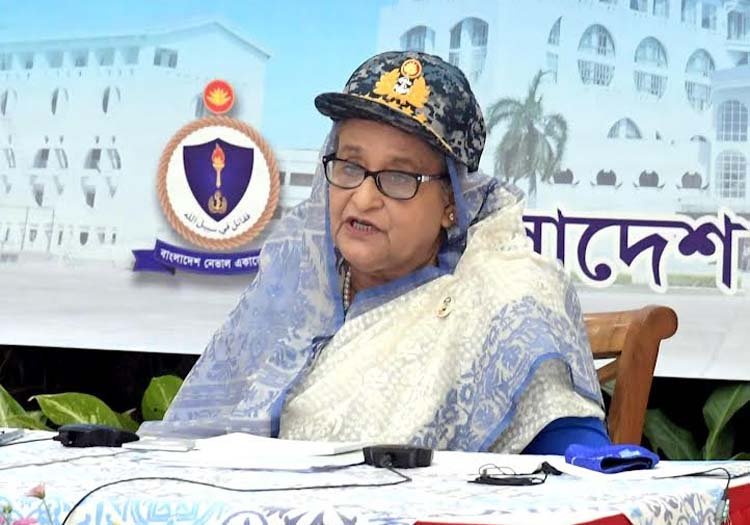 Prime Minister Sheikh Hasina on Monday said the government has planned to induct more advanced warships and war equipment into the Bangladesh Navy as part of defence modernisation.

She was addressing a function as the chief guest virtually joining it from her official residence Ganobhaban, marking the ‘President Parade’ of the passing out cadets of the Midshipman 2019 Alfa and Direct Entry Officer (DEO) 2021 Bravo.

Hasina said the Navy has been turned into a truly full-fledged “three-dimensional” force through inducting two submarines — ‘BNS Navajatra’ and ‘BNS Joyjatra’ in 2017.

She mentioned that now the navy is able to play a stronger role in ensuring the safety of the country’s vast maritime areas, which is rich with natural resources, as well as prevent human trafficking and smuggling, and ensure the security of fishermen and the safe passage of merchant ships.

Besides, she said, work is underway to build a permanent submarine base — “BNS Sheikh Hasina” — with modern basin facilities at Pekua in Cox’s Bazar to provide safe jetty facilities to submarines and warships at the harbour.

The Prime Minister said the construction work of ‘Sher-e-Bangla Base’ has progressed a lot to enhance the operational and communication facilities of naval vessels in the coastal areas of southwestern Bangladesh.

She said the government has worked on various infrastructural developments, procurement of warships and strengthen the operational capacity of the existing ships.

After coming to power 2009, she said, the government has started implementing the ‘Forces Goal-2030’ in light with the defence policy formulated by Father of the Nation Bangabandhu Sheikh Mujibur Rahman.

“In order to build the navy as a modern and regional strong force, the government is taking and implementing realistic plans such as various infrastructural developments, incorporation of warships to the navy and strengthening operational capacity of the existing ships.”

She said the government has already incorporated a significant number of modern warships, helicopters, maritime patrol aircraft (MPA) and submarines to the Bangladesh Navy with state-of-the-art combat equipment and technology.

In this connection, Hasina mentioned, a new MPA from Germany has been commissioned to the Aviation Wing of Bangladesh Navy last November 2021. “Another will be inducted in May 2022.”

She also mentioned that the construction of a second hangar with all modern facilities for operation and maintenance of helicopters and MPA is going on.

The Prime Minister said Khulna Shipyard Limited, being managed by the Bangladesh Navy, has already attained the capacity to build Patrol Craft and Large Patrol Craft.

“A decision has been taken to build a modern warship at Chottagram Drydock Limited run by the Bangladesh Navy to transform the Navy as a ‘Builder Navy’ from a ‘Buyer Navy’,” she said.

Hasina mentioned that the government is also working to increase and streamline the organisational structure of the Bangladesh Navy to ensure the best use of these sophisticated technologies. The government has been working relentlessly for the economic and socioeconomic development of the country, she added.

Hasina said the Father of the Nation had a dream to establish a modern academy to develop competent leadership for the military through providing advanced training to the country’s young generation.

She said the ‘Bangabandhu Complex’ with modern facilities has been inaugurated in 2018 and training facilities at the Naval Academy have elevated to international level with this.

Hasina said she firmly believed that the naval officers trained in the academy will take advantage of this increased opportunity to lead the navy forward with more confidence.

On behalf of the Prime Minister, Chief of Naval Staff Admiral M Shaheen Iqbal distributed prizes among the winners and spoke at the programme.

The cadets also took formal oaths on the occasion.

Bangladesh Navy arranged a spectacular parade on the occasion. The Prime Minister witnessed it from Ganobhaban.