PM for continuing friendly relations with all countries 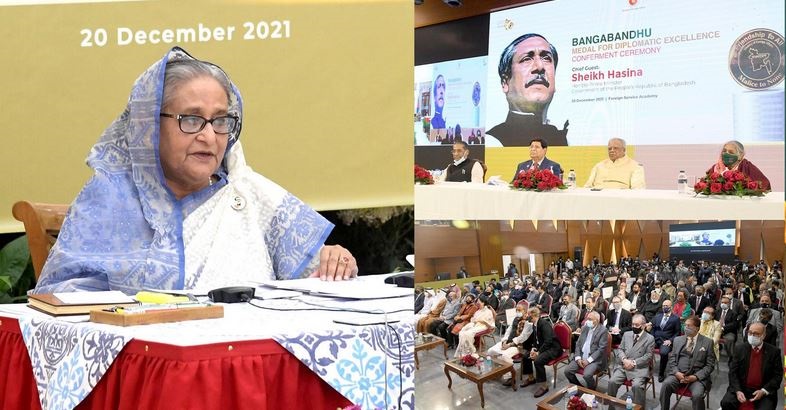 “We want to keep intact friendly relations with all countries and march the country forward through socio-economic advancement,” she said.

The premier was distributing the maiden “Bangabandhu Medal for Diplomatic Excellence-2020” at a function in Foreign Service Academy in city, joining virtually from her official Ganabhaban residence in Dhaka, BSS reports.

She expressed her belief that the award would encourage the Bangladeshi diplomats to be the best performers discharging their duties with utmost professionalism from the places of their current assignment.

Besides, she said, “diplomats of our friendly countries will be inspired to take relationship between their respective countries and Bangladesh to a new height”.

The prime minister said that they have solved maritime boundary problems with India and Myanmar keeping friendly relations with them.

“This is our diplomatic success,” she said and greeted all concerned for bringing the success.

The premier heavily came down on the past Zia, Ershad and Khaleda Zia regimes for their inaction in resolving maritime boundary problems with neighbouring India and Myanmar following up Bangabandhu government’s initiatives to settle the issue.

Sheikh Hasina said her government had taken initiatives to resolve the long pending issue first after assuming office in 1996 and eventually resolved it when it was again elected to power in 2009.

The prime minister said that her government had also resolved the land boundary problem with India by implementing Mujib-Indira Agreement.

Regarding the book, Sheikh Hasina, said she doesn’t want anything in her life rather than to fulfill the dream of Father of the Nation.

“I have nothing to want. I even don’t want anything for me. I have been working to bring smile on the faces of the distressed people,” she said.

She also expressed eagerness to materialise the dream of her father (Bangabandhu Sheikh Mujibur Rahman) to transform Bangladesh into a developed and a prosperous country free from poverty and hunger.

The prime minister said that there would be no hunger and monga in the country as her government has been tirelessly working to build Bangladesh as a developed nation by 2041.

Bangladesh has got recognition as a developing country on the occasion of the country’s Golden Jubilee of Independence which is the biggest achievement, she said.

She added: “But, we have to advance Bangladesh forward more by achieving the United Nation’s sustainable development goals by 2030.”

Sheikh Hasina said her government has started implementing the Delta Plan-2100 to offer the generation after generation a beautiful and developed life.

The premier said the two diplomats, who won the medals today, have shown remarkable diplomatic prowess from their respective positions.

She said Al-Muhari has played a vital role in strengthening the existing ties between his country and Bangladesh and the two countries people during his tenure in Dhaka.

The premier also said Alam has been working on the delimitation of Maritime Boundary and Blue Economy for a long time.

During the tenure of our government, he has carried out the task of the conclusion of maritime boundaries dispute with India and Myanmar with utmost professionalism, she continued.

On behalf of the prime minister, Foreign Minister Dr AK Abdul Momen handed over the awards to the recipients.

After receiving the awards, the two recipients shared their feelings.

While sharing his feelings, Syed Mohammad Al Muhari dedicated the medal to the peoples of UAE and Bangladesh.

The diplomats from the foreign missions stationed in Bangladesh were also present at the function.