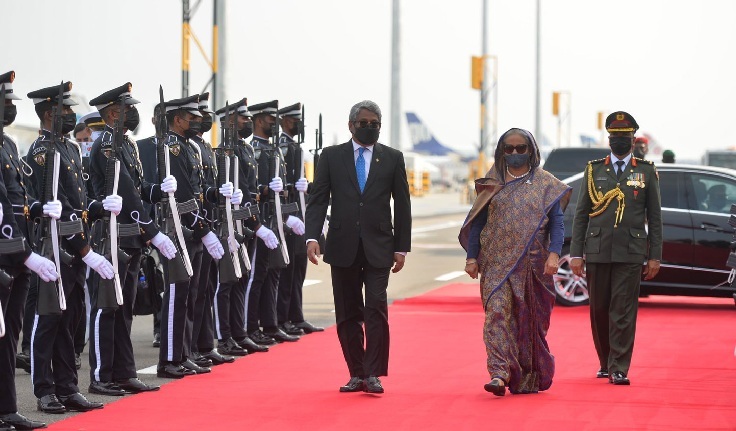 Prime Minister Sheikh Hasina was accorded a red-carpet reception after she reached Male on Wednesday afternoon on a six-day official visit to the Maldives at the invitation of Maldivian President Ibrahim Mohamed Solih.

This is Prime Minister Sheikh Hasina’s first-ever bilateral official visit to the Maldives.

According to the Foreign Ministry, four instruments, including two Memoranda of Understanding (MoUs) on health, education, transfer of prisoners and on avoidance of dual taxation, are likely to be signed during the visit.

The four proposed instruments are Agreement on Avoidance of Double Taxation and Prevention of Fiscal Evasion with respect to Taxes on Income; Agreement on the Transfer of Prisoners; MoU in the areas of Healthcare and Medical Sciences between Bangladesh and Maldives (renewal); MoU between Bangladesh and Maldives on Cooperation in the Area of youth and Sports Development.

Besides, the MoU on Recruitment of Qualified Health Professionals between Bangladesh and the Maldives will be renewed.

During the visit, Bangladesh will gift 13 military vehicles to the Maldives as a token of friendship between the two south Asian nations, according to the Foreign Ministry.

On December 23, Prime Minister Sheikh Hasina will be formally received by Maldivian President Ibrahim Mohamed Solih at the Presidential Palace. She will be given guard of honor there.

The Prime Minister will have a bilateral meeting with the Maldivian President to discuss various issues.

After the meeting, the officials concerned of the two countries will sign the instruments in the presence of the Bangladesh Prime Minister and the Maldivian President.

A joint statement will be issued between the two countries while the two leaders will jointly appear in front of the media.

The Prime Minister will address the People’s Majlis, the Maldives National Parliament, on the afternoon of December 23.

In the evening, Hasina is scheduled to attend a state banquet to be hosted by the Maldivian President and the First Lady in her honor.

From December 24 to 26, the Prime Minister will virtually join community receptions to be given by Bangladeshis expatriates in Male.

The Prime Minister is scheduled to return to Dhaka on December 27.