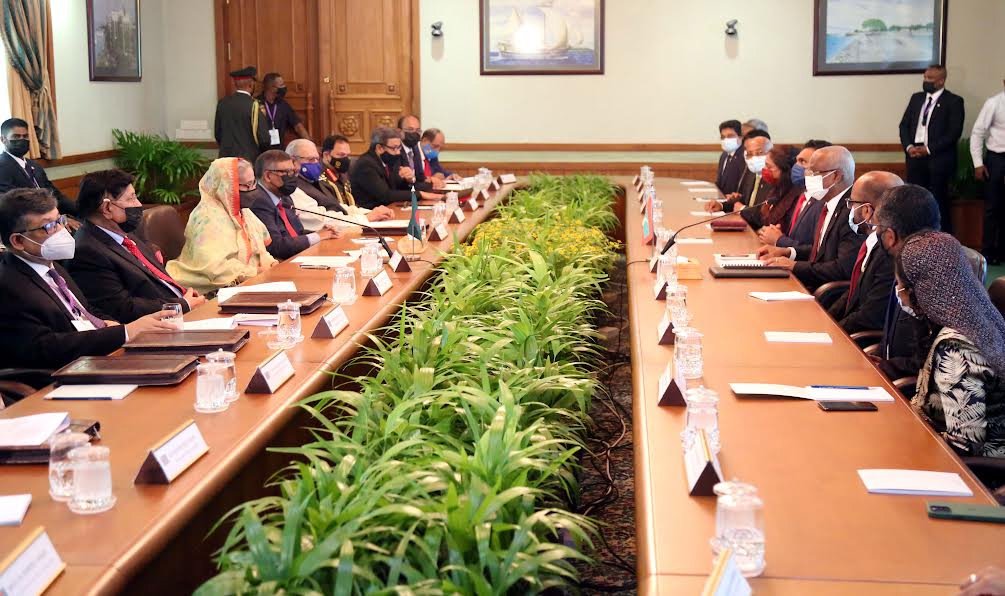 Three instruments were signed on Thursday between Bangladesh and Maldives on health, education, dual taxation, youth and sports, elevating the bilateral relations to new height.

The signing ceremony was held at the President’s Office this morning in presence of Bangladesh Prime Minister Sheikh Hasina and Maldivian President Ibrahim Mohamed Solih after the bilateral talks between the two leaders, reports BSS.

Bangladesh has also gifted 13 military vehicles to the Maldives as a token of friendship between the two South Asian nations during the ceremony.

Earlier, on arrival of Prime Minister Sheikh Hasina at the President’s Office, she was formally received by Maldivian President Ibrahim Mohamed Solih as a red carpet was rolled out with according a guard of honor and
presenting gun salute.

The prime minister also visited the line of presentation of both the countries.

Sheikh Hasina has signed the visitors’ book kept at the President’s Office and took part in a photo session there.

The premier arrived at Male, the capital of Maldives on her six days maiden bilateral visits by a VVIP special flight of the Biman Bangladesh Airlines yesterday afternoon (December 22 afternoon).