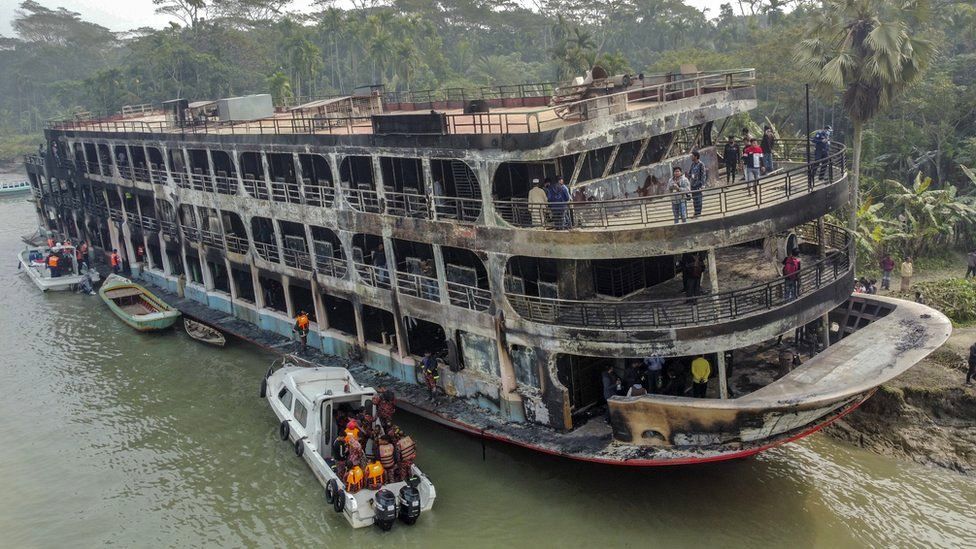 The death toll from deadly launch fire off the coast of Jhalakathi rose to 44, with the recovery of two more bodies from the Sugandha River on Tuesday.

The bodies of the unidentified people were fished out by firefighters from the waters adjacent to the Jhalakathi launch terminal at Shachilapur in the district, said Shafiq, deputy assistant director of the district fire service.

The deceased were a boy aged around 12 and a man aged around 32, according to the Jhalakathi Fire Service and Civil Defence, reports UNB.

The man’s face was burnt beyond recognition and he was wearing an off-white sweater and jeans, said Shafiq. “The body has been sent for an autopsy.”

Meanwhile, Coast Guard members and firefighters continued their search operation in the Sugandha river for the fifth day in a row.

Meanwhile, an FIR was lodged at Jhalakathi police station on Monday night, following a complaint from the victims’ side, accusing eight people, including launch co-owner Hamjalal Sheikh, for the tragedy.

Earlier on Monday, the Rapid Action Battalion (RAB) arrested owner Hamjalal in connection with the deadly fire on board the launch, MV Avijan-10.

His arrest followed the Dhaka Marine Court’s warrants for the arrest of four owners and four staffers of the launch in a case filed by the department of shipping.

The blaze broke out around 3am on Friday on the Barguna-bound launch carrying some 800 passengers from Dhaka and it engulfed the entire vessel within 10 minutes.

The death toll from the fire accident climbed to 42 on Monday morning. Besides, over 81people suffered injuries, and many of them are currently undergoing treatment at different hospitals.