Khaleda Zia must submit fresh plea if she wants to go abroad: Anisul 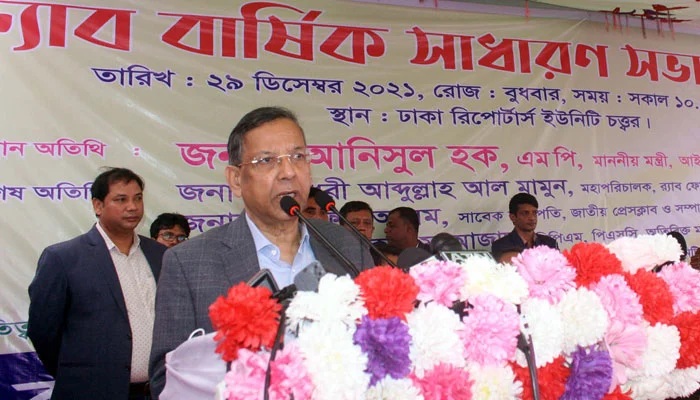 Former Prime Minister and BNP Chairperson Khaleda Zia will have to go back to jail first and file a fresh plea to the government if she wants to go abroad, said Law Minister Anisul Huq on Wednesday.

The BNP chief’s medical board members on November 28 said she immediately needs to go abroad for better treatment as she was diagnosed with liver cirrhosis.

The Ministry of Law has sent its opinion to the Ministry of Home Affairs making remark that “there is no legal scope” to allow Khaleda Zia to go abroad as she has been allowed to remain outside jail on bail under special consideration.

“Khaleda was released under Section 401 of the CrPC and Prime Minister Sheikh Hasina approved her plea on humanitarian grounds. The plea was disposed of and there is no scope to reconsider the disposed plea and you (journalists) know the government can’t do anything against the law,” he said.

Anisul Huq said, “We can discuss if another plea is submitted to the government. I am saying here and also said in parliament. Khaleda Zia was released on humanitarian grounds with the conditions that she would stay at her home. She was temporarily released under Section 401 of the Criminal Code of Procedure based on some conditions, including not leaving the country, there is no provision in the law to allow her to go abroad now until she submits a fresh petition after going to jail.

On Khaleda’s treatment at Evercare Hospital in the capital, Anisul Huq said Khaleda’s physical condition has improved and she is getting proper treatment there. The government has nothing to do here.

Replying to a query about the Digital Security Act (DSA), the minister said, “There’s no scope to arrest any journalist under the DSA instantly if anyone is sued under the act and we’ve taken steps in this regard.”

He also mentioned that the DSA Act was not enacted to curb the freedom of the media.

“There’s an importance of the DSA Act and we’re also informed about its misuse,” he said.