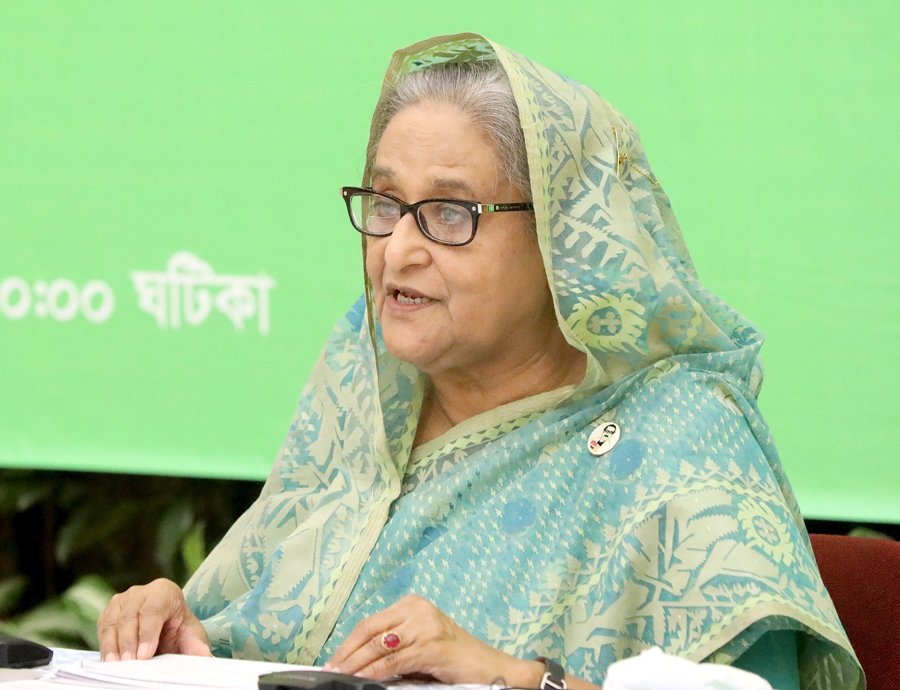 Prime Minister Sheikh Hasina on Thursday reiterated her call to the countrymen to receive Covid-19 jab to escape the lethal virus infection newly, directing the authorities concerned to make the vaccination campaign in grassroots level available through community clinics.

“We have to take measure so that none is infected (with Coronavirus) again and none remains beyond vaccination coverage,” she said, adding “Everyone has to take Covid-19 jab.”

She also said that the ministry of health has already been asked to make the vaccination drive available in villages and grassroots levels through each community clinic and health centre.

She said the Covid-19 jab would be administered through community clinic or health centre across the country but “those who has yet to receive the jab, they must have to get it”.

Sheikh Hasina opined that the ministry of education and other concerned will have to be cautious so people would receive the jab.

She also asked all concerned to make sure that student and their guardian would get vaccine.

Turning to SSC and equivalent examinations results, she extended her greetings to the successful students.

The prime minister also urged the parents of the unsuccessful students to cooperate them so they can continue their studies.

Parents or guardian have to come forward so the students can carry on their studies availing the facilities being provided by the government online and through other mediums, she said, adding, “Guardian is not only the guardian rather they have to carry out role of teacher.

Mentioning that her government has laid emphasis on two issues –nutrition and mental health awareness, she said they have initiated the school feeding programme and simultaneously parents or guardians have to pay heed to nutrition of their kids.

In this connection, she said one lakh teachers and officials have been imparted training so they can give lesson to their students about nutrition.

On the other hand, she said around two lakh teachers have been provided training on mental health while it is one of the most important issue as many of this country are not aware of their kids’ mental health.

She noted that some time many kids do not read or they don’t have concentration on lesson or can’t pay attention to teacher in class room and then it was said that the kids are inattentive or cannot continue study.

But, the issue is not like that rather it is one type of disability and different type of syndrome, she said, adding that it has to be paid concentration why he/she can’t do this and what is the reason.

The prime minister said, “Our guardian or teacher is not aware of it and that is why this awareness is urgently necessary”.

She opined that each teacher should be made aware about it by the education ministry and each education institution should conduct screening campaign to find out whether there is any problem among the students.

Mentioning that most of the former joint families in the country turned into single family, the prime minister said, “In the joint family if any child had minor problems, it would have been cured as they used to play with many children in combine”.

She told the parents in single family that they should give company to their kids and arrange the scope so their children could spend time with others to ensure their mental growth and health.

She continued that they (parents) should not confine their children only in textbook study rather make the arrangement of environment of study, developing social relations with others and growing up socially.

The head of the government said they have made arrangements such as vocational training and other educational institutions in upazila and grassroots levels for study so that everyone get proper education.

She said no work is smaller rather every work has an honour as “respecting work is the biggest thing” and this lesson needs to be given to the children from their early age.

Mentioning that today’s student will be the golden people for building Bangabandhu’s “Sonar Bangla”, she urged the parents and teachers to pay attention to grooming up them in this way.

“We have to build the skilled citizens and make them worthy of taking the advantages of the 4th Industrial Revolution,” she said.

About the textbook distribution, Sheikh Hasina said today is a very important day for every student as books are being given in New Year along with the announcement of results.

“The joy of getting new books is different as wrapping the new book and writing the name on it, is an amazing feeling,” she added.

She said the government is preparing the books for the visually impaired students alongside the general students as well so they do not lag behind.

“We are also making books in the language of small ethnic groups. So far we have got five of their languages and made books in those languages,” she added.

The premier said the Covid-19 infection is usually seen to be rise immediately after the winter season in country. So the education ministry will have to take preparation from right now on to continue the online learning programmes in case of possible surge in Covid-19 infection, she said.

“Since it will not be possible to keep schools open in case of fresh surge of Covid-19, measures will have to be taken to reach online teaching to every house,” she said.

At the outset of the event, the prime minister unveiled the Secondary School Certificate (SSC) and equivalent examinations results alongside opening the free textbook distribution ceremony.

Candidates will be able to get their results from websites and through SMS.

A total of 22,78,098 students participated in the SSC and equivalent examinations under 11 education boards.

Besides, like previous year, the prime minister also inaugurated the free textbook distribution among the students of primary and secondary levels.

On behalf of the prime minister, the education minister and the state minister for primary and mass education handed over the books among the selected students from the different educational institutions.