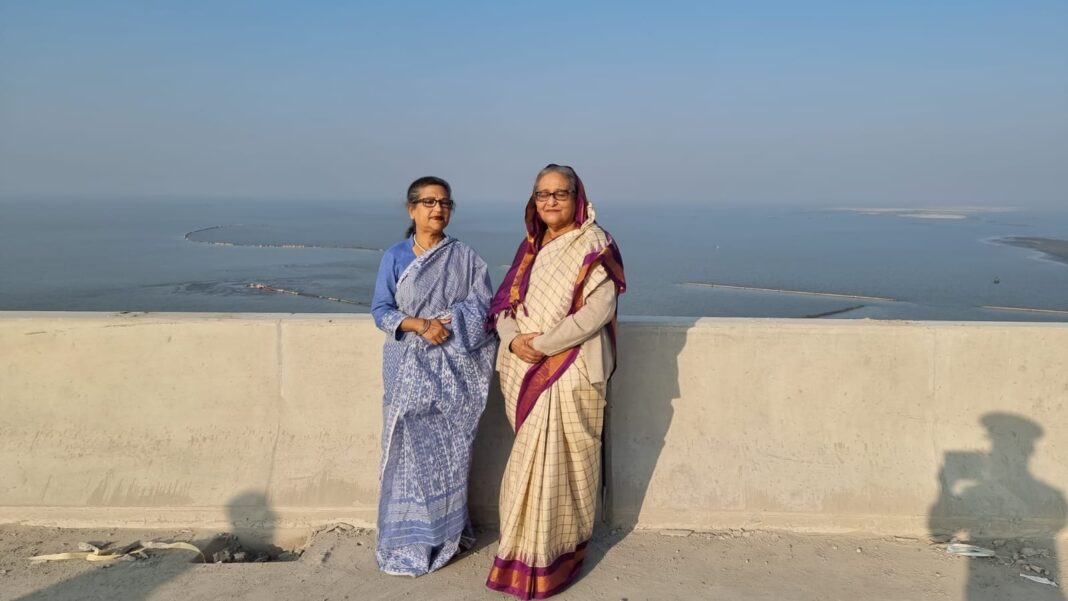 Prime Minister Sheikh Hasina along with her sister Sheikh Rehana visited the Padma Bridge on Friday to witness the progress of the country’s largest infrastructure project.

The premier along with her convoy reached the bridge at 7.23am in the morning.

During the visit, she took a two-kilometre stroll on the bridge’s from Pillar N0. 7 to Pillar No. 18 with Sheikh Rehana.

After attending a breakfast event arranged by the Bangladesh Bridge Authority at the Janzira point, Hasina left the bridge area at around 10:00am.

The prime minister looked all cheerful and content as she inspected the progress of the construction sites of the much-awaited Padma Bridge.

After the last span installation on December 9, the Padma Multipurpose Bridge is now 6,150 metres long and ranks just over the Oland Bridge of Sweden.

Padma Bridge is the 122nd longest bridge in the world.

The Padma Bridge became visible on September 30, 2017 with the installation of the first span on pillars 37 and 38. After 38 months, the work of installing all the spans was completed.

The bridge’s toll plaza, connecting road and other structures have fallen in Shibchar of Madaripur, involving three districts with the Padma Bridge. The bridge’s length on the river body is 6.15km, being joined with 41 spans – each 150 metres long–on 42 pillars.

The two-storey metal and concrete bridge offer road transports to ply on the upper floor and trains on the lower.

In addition, a 4-kilometre viaduct on both sides of the bridge has already been constructed and it includes no steel span.

However, according to Project Director Md Shafiqul Islam, the bridgework may be completed by 2022 as the work has been delayed due to the pandemic.

In 2007, the Executive Committee of the National Economic Council (ECNEC) approved the Padma Bridge construction project at a cost of Tk 10,162 crore.

However, the World Bank decided to refrain from financing the project over allegations of corruption plots. Other donors followed the footsteps of the World Bank.

Later, the Bangladesh government decided to build the bridge with its own funds in 2014 rejecting allegations of corruption.

At one stage, the allegations of corruption proved unfounded in a Canadian court. An investigation by the Anti-Corruption Commission also did not find evidence of corruption in the project.