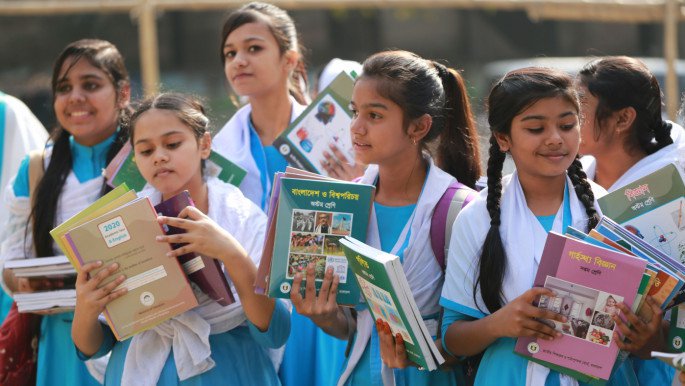 Although there has been no textbook festival on the first day of the New Year due to the pandemic, the distribution of free textbooks began across the country on Saturday.

Some 347 million copies of textbooks will be distributed among some 41.7 students up to the secondary level from pre-primary level across the country in the 2022 academic year.

The textbooks are being distributed among students in their respective classrooms maintaining health protocols, UNB reports.

Correspondents from different districts, including Rangamati, Brahmanbaria, Faridpur, Barishal, Natore and Magura reported that textbooks were distributed among students in their districts on the first day of 2022.

Prime Minister Sheikh Hasina on Thursday formally inaugurated the distribution of the free textbooks among students up to the secondary level for the academic year of 2022.

She opened the textbook distribution, joining a ceremony in the city’s Bangabandhu International Conference Centre (BICC) virtually from her official residence Ganobhaban.

On behalf of the Prime Minister, Education Minister Dr Dipu Moni and State Minister for Primary and Mass Education Md Zakir Hossen handed over textbooks to some students of primary and secondary levels at the function.

No festival marking the distribution of free textbooks was held in 2021 either due to the pandemic.