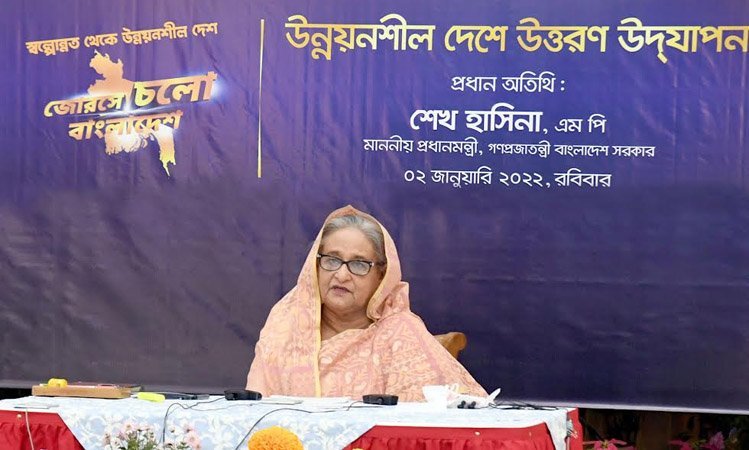 Prime Minister Sheikh Hasina today said her government is set to formulate a Smooth Transition Strategy (STS) to continue the ongoing development spree for transforming Bangladesh into a developed and prosperous nation by 2041.

“We have taken a measure to formulate a Smooth Transition Strategy aimed at continuing the country’s ongoing development spree,” she said.

The Prime Minister said this while addressing a function, arranged to celebrate the formal recognition of Bangladesh’s graduation to a developing nation by the United Nations (UN), at Bangabandhu International Conference Centre (BICC) here.

Joining virtually from her official Ganabhaban residence here, she also said, the strategy would have effective guidelines to cash on the prospects and face the challenges which might be arisen in continuing the development journey of the nation.

The Prime Minister called upon the authorities concerned to prepare an effective strategy based on research and data.

Sheikh Hasina said: “We have to materialise the dream of Father of the Nation to build a developed and prosperous country.”

The Prime Minister vowed to go ahead with the ideals of Bangabandhu to materialise his dream no matter how much dark the path would be.

“I know many bullets, bombs, and grenades are waiting for me. I never care about those. I am working to change the fate of the people, and I will definitely do it,” she said.

She continued: “No matter whatever hurdle comes before me as I know the paths of the people, who love their country, and they would have to go through many impediments.”

Nobody would live forever, the Prime Minister said, adding so, the new generation would have to shoulder the responsibilities to carry forward the country’s development spree towards prosperity.

“I want to call upon the new generation to love the country and to work for its people,” she said hoping that the development spree will be continued at the hands of the future generation.

Presidents of the World Bank, Asian Development Bank, JICA and Asian Infrastructure Investment Bank, and Administrator of the USAID through video messages greeted Bangladesh for its graduation to a developing country.

On behalf of the UN Secretary-General, a video message was also screened at the ceremony.

Bangladesh U-19 Women Football Team which clinched the SAFF U-19 Women Champion also greeted the Prime Minister for the graduation.

Representatives from the young generation also expressed their feelings on Bangladesh’s graduation.

At the onset of the programme, the national anthem was played.

Several video documentaries on the development journey of Bangladesh, achieved under the leadership of Father of the Nation Bangabandhu Sheikh Mujibur Rahman and Prime Minister Sheikh Hasina, were also screened.

Describing the UN recognition as a great achievement for Bangladesh, Sheikh Hasina said that the accomplishment of Bangladesh’s graduation from the LDC to a developing country did not come ordinarily, rather it has been possible due to her government’s planned initiatives that included short, medium and long-term plans alongside unwavering support of the countrymen, development partners and friendly countries.

She said the development miracle has come as the Awami League led-government has remained in power for the last 13 years since 2009.

The Prime Minister promised that she would never stop the journey to take the nation forward and make it a developed and prosperous one confronting all the odds, such as thorny, daunting, dark, and bloody paths, to materialize the dream of the Father of the Nation.

She said that the UN recognition would make Bangladesh one step ahead to materialise the dream of Father of the Nation to give the countrymen a beautiful and developed life.

Highlighting various development programmes taken by the government to ensure the country’s overall progress, she said that they have formulated the Delta Plan-2100 which is now being implemented to continue the development spree.

The Prime Minister said that Bangabandhu’s government had achieved 9 percent GDP growth during his only three and a half years tenure alongside rebuilding a war-ravaged country, referring to various development measures taken by him.

Sheikh Hasina, the elder daughter of Father of the Nation, said no other government had been able to achieve the growth.

When Bangabandhu had taken a programme to make Bangladesh a developed country decentralizing the power to the grassroots, he along with most of his family members were brutally killed on August 15, 1975.

After Bangabandhu’s assassination, the governments of military dictators did nothing for the countrymen.

Assuming office after 21 years, the Awami League government has started working to change the fate of the Bangladeshi people.

After Bangabandhu’s government, her government had been able to achieve 8 percent growth in GDP, she said.

But the Coronavirus pandemic has stalled everything not only in Bangladesh but across the globe, she added.

The Prime Minister said that her government has already given 13 crore doses of the Covid-19 vaccines as part of her government’s move to bring the people under vaccination free of cost while inoculation of booster doses has already started.