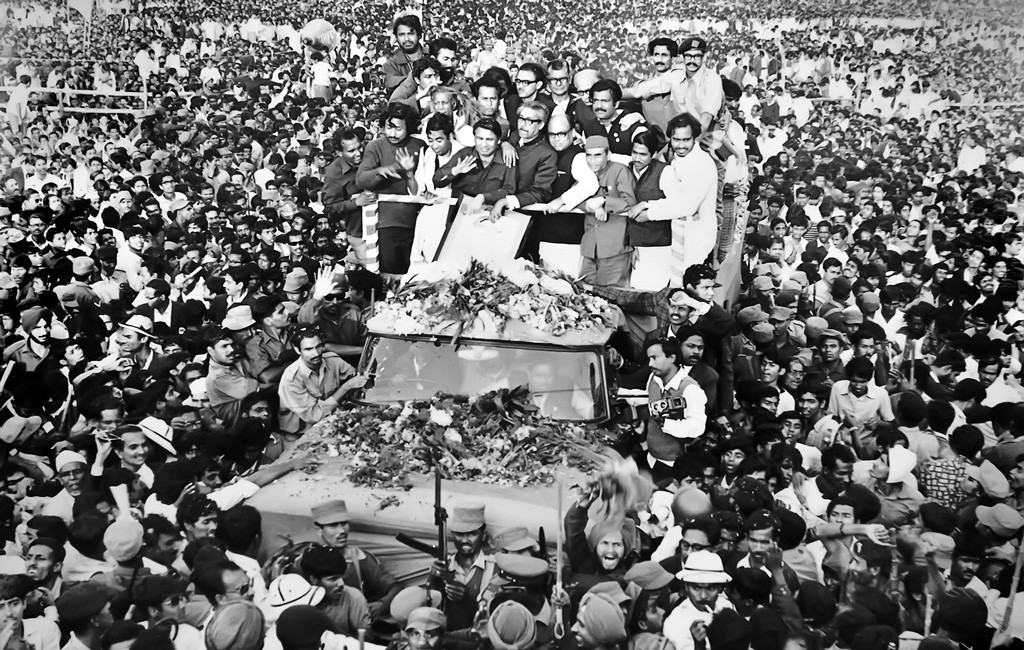 The historic Homecoming Day of Father of the Nation Bangabandhu Sheikh Mujibur Rahman, the greatest Bangalee of all time, is being observed on Monday across the country in a befitting manner.

Bangabandhu, the undisputed leader of the nation and supreme commander of the country’s Liberation War, returned to the sacred soil of independent Bangladesh via London and New Delhi on January 10 in 1972, after 290 days of confinement in Pakistan jail, reports BSS.

President M Abdul Hamid and Prime Minister Sheikh Hasina issued separate messages paying glowing tributes to the Father of the Nation on the eve of the day.

A programme titled ‘Father of the Nation in Independent Country (Mukto Swadeshe Jatir Pita)’ will be live broadcast on all television channels, online and social media at 3pm today from Shaheed Manirul Alam Auditorium of the Bangladesh Television here.

Bangabandhu’s daughter Prime Minister Sheikh Hasina will chair the programme virtually joining from her official residence Ganabhaban in the city.

Poems of Sheikh Rehana, Bangabandhu’s younger daughter, written on her parents will be recited in the function while a discussion on the significance of Bangabandhu’s homecoming will also be held.

The AL’s programmes begun with hoisting of the national and party flags at the AL central office, Bangabandhu Bhaban, and its party offices across the country at 6:30 am today, an AL press release said.

AL leaders and workers paid homage to Bangabandhu by placing wreaths at his portrait in front of Bangabandhu Bhaban in the city’s Dhanmondi area in the morning.

At 11 am, an AL delegation will pay respect to the undisputed leader of the nation by placing wreaths at his grave in Tungipara.

On the occasion, a discussion will be held on a limited scale at the party’s central office in the city’s Bangabandhu Avenue at 3.30 pm, maintaining the health safety guidelines.

Prime Minister and Awami League President Sheikh Hasina will address the discussion through videoconferencing from her official Ganabhaban residence.

Besides, all district, city, upazila, thana, union and ward level units of the AL, its’ associate and likeminded bodies will organise similar programmes to observe the day in a befitting manner.

In a statement today, AL General Secretary and Road Transport and Bridges Minister Obaidul Quader urged all party leaders and workers and its associate and likeminded bodies to observe all the programmes, marking the
Bangabandhu’s Homecoming Day in a befitting manner, maintaining the health safety guidelines.

On the night of March 25, 1971, Pakistan army arrested Bangabandhu from his Dhanmondi residence and sent him to a West Pakistani jail the following day.

Bangabandhu was subjected to inhuman torture in the Pakistan jail where he had been counting moments for the execution of his death sentence that was pronounced in a farcical trial.

“I was a prisoner in the condemned cell awaiting hanging. From the day I went into jail, I didn’t know whether I would be alive or not. I was mentally ready to die. But I knew Bangladesh would be liberated,” Bangabandhu spoke emotionally about his ordeal in Pakistani prison at a news conference in London.

About the Pakistan army’s genocide on Bangalees, Mujib said: “If Hitler had been alive today, he would have been ashamed.”

Earlier, on March 26 in 1971, Bangabandhu proclaimed independence of Bangladesh and urged people from all walks of life to participate wholeheartedly in the nation’s War of Liberation.

Immediately after the proclamation of independence, Bangabandhu was arrested by Pakistani military junta and then flown to West Pakistan to keep him in prison there.

Though the final victory through the nine-month-long bloody War of Liberation was achieved defeating Pakistani occupation forces on December 16 in 1971, the nation’s expectations were fulfilled and the people got the real taste of victory with the homecoming of Bangabandhu on January 10, 1972.

On reaching Dhaka (Tejgaon) airport in the afternoon on January 10, Bangabandhu was greeted by tens of thousands of jubilant people who had been eagerly waiting to see their beloved leader since the victory on December 16 in 1971.

From the airport Bangabandhu was escorted to the Racecourse Maidan (now Suhrawardy Udyan) where he addressed a spontaneous reception accorded to him by the cheerful countrymen believed to be one million.

He recalled with deep respect the contribution of all during the war and urged the people to rebuild the war-ravaged country.

Bangabandhu took the oath of office as the country’s Prime Minister on January 12, 1972.