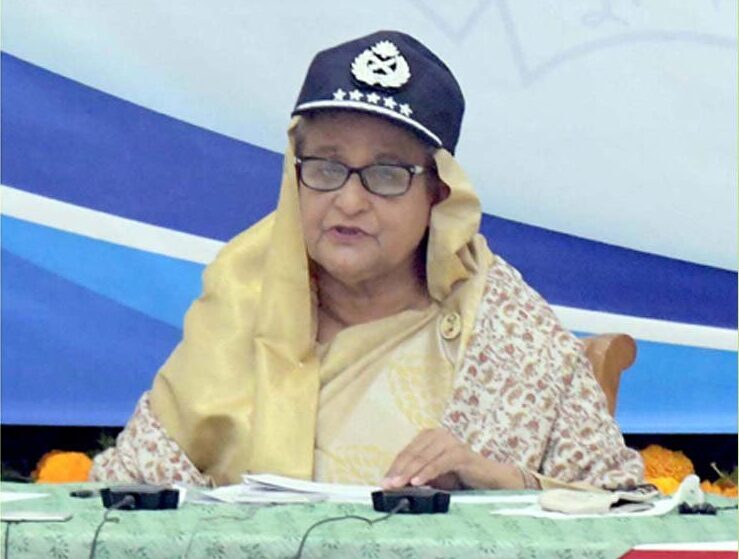 Prime Minister Sheikh Hasina on Sunday asked the police personnel to work with professionalism to protect the country’s hard-earned independence along with maintaining the law and order situation and upholding the democracy in the country, reports BSS.

“You have to protect the independence achieved through the 24-year long struggle by the Father of the Nation and in exchange for blood of your predecessors, from all sorts of attacks,” she said.

She said this as the chief guest while opening the Police Week-2022 at a function held at Rajarbag Police Line in the city, joining virtually from her official Ganabhaban residence here.

The prime minister added: “My belief is that each member of the police force will work with professionalism and carry out pro-people service to maintain the country’s law and order and uphold democracy”.

Sheikh Hasina said her government has been providing all the required modern facilities and transportation alongside imparting training to the police personnel to render quick services to the people.

The premier said purchasing two helicopters for the police is now under process.

She also extended her thanks to the policemen for standing beside with people by risking life during the global Covid-19 Pandemic.

The Police Week-2022 is being observed in the country this year with the theme “Skilled Police, Prosperous Country, Bangabandhu’s Bangladesh.”

Home Minister Asaduzzaman Khan on behalf of the prime minister visited the parade and took salute, riding on an open jeep.

On behalf of the prime minister, the home minister handed over the police awards in four categories to 230 policemen for their outstanding performance in 2020 and 2021. Seventeen of them were awarded posthumously.

In 2020, of the 115 awardees, 15 of them received the BPM-gallantry and 25 the PPM-gallantry awards while 25 got BPM-Service and 50 the PPM-Service awards for their outstanding performance in respective fields.

RAB Director General and Additional Inspector General of Police Chowdhury Abdullah Al-Mamun was among the awardees.