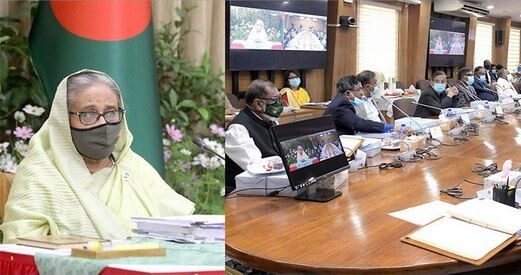 Prime Minister Sheikh Hasina on Tuesday directed the authority concerned to promote overseas jobseekers to take loans from Probashi Kallyan Bank instead of selling lands to go abroad in a bid to protect them from deception.

She also asked the Expatriates’ Welfare and Overseas Employment Ministry to make the overseas employment process very transparent and go for massive campaign in the media to make the info available to jobseekers.

The Premier gave the directives while chairing the virtual Cabinet meeting from her official residence Ganabhaban, BSS reports.

The other concerned were connected with the meeting from the Bangladesh Secretariat.

“The Prime Minister has given instruction that the process will have to be made very precise and transparent for those who would go abroad,” said Cabinet Secretary Khandker Anwarul Islam while briefing reporters at the Secretariat after the meeting.

“She (Premier) also instructed to carry out massive campaign in media – televisions, radios and newspapers—informing them (jobseekers) about the exact authority and the amount of cost,” he said.

“Sheikh Hasina also asked them (jobseekers) to go abroad taking loans from Probashi Kallyan Bank, if they need money, as the bank doesn’t provide a loan without appointment letters. So, they will be safe… they will not be deceived,” he added.

The ministry also asked to take steps so Bangladeshi workers would in no way make excess payments in availing the overseas jobs and they would go abroad taking contacts with the ministry and its directorates concerned, said the Cabinet Secretary.

Because, many Bangladeshi workers go abroad, making direct payment, knowing nothing about the jobs after getting ensnared by a class of middlemen. Some such cases were also discussed in the Cabinet meeting, he said.

“If they take loans from the bank not selling lands, the bank would not pay money until confirmation of their appointment. So, they would remain safe,” he added.

Some Bangladeshis went to Malaysia spending Taka 3-4 lakh, but many of them could not recover their cost in two years and returned home with empty hands, said Anwarul Islam.

In the meeting, the Prime Minister also instructed the authorities concerned to raise another issue before the jobseekers that tens of thousands of workers would be required in the 100 industrial parks including Mirsarai economic zone, which are now being constructed at different places in the country.

In order to avail a job with handsome income in the country, the jobseekers can be asked to build their capacity and get trained, knowing the job demands in the industrial parks, she said.

In the meeting, the Cabinet approved in principle the draft of Bangladesh Forest Industries Development Corporation Act, 2022 aiming to run the corporation under a time-befitting law.

“The corporation is run under ‘Forest Industries Development Corporation Ordinance 1959.’ Now the proposed law has been brought to make an updated law,” said the Cabinet Secretary.

The meeting also endorsed the draft of Bangladesh National Conservation Strategy 2021-2036, formulated in both Bengali and English in a bid to conserve the natural environment and resources properly.

“Some 10-12 ministries are involved here, who will sit regularly to take plans as per the strategy and implement the programmes to conserve our environment,” said Anwarul Islam.

As per the policy, the retailers can import goods of maximum US$ 0.5 million instead of US$ 0.2 million through TT (Telegraphic Transfer of money) instead of LC.