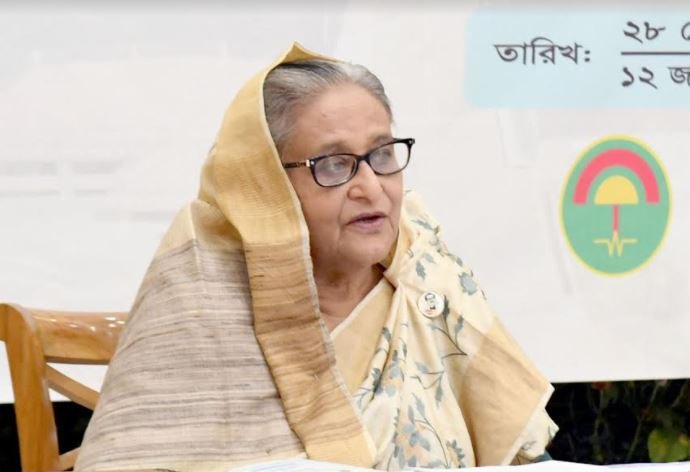 Prime Minister Sheikh Hasina on Wednesday said the Narayanganj City Corporation (NCC) polls proved again that the people never make any mistake as they have elected their favorite candidates in a free, fair and neutral election.

“The people never do mistakes and that’s the reality… It has been proved again in the NCC elections,” she said.

The premier said this at the oath-taking ceremony of newly-elected mayor of NCC Dr Selina Hayat Ivy and 36 councillors at Osmani Memorial Auditorium in the city, UNB reports.

She administered the oath of office to Dr Ivy joining the ceremony virtually from her official residence Ganabhaban here.

Mentioning that her government believes in democracy and people’s right to vote, Sheikh Hasina said the people will vote to elect the candidate by their choice who will work for them.

“Because, the people never do any mistake . . . that is why we do everything keeping confidence in people,” she said.

Expressing thanks to the Election Commission (EC) and the law enforcement agencies for holding free and fair elections in NCC, she said through this polls, the people have exercised their voting rights and elected the candidates of their choice.

The prime minister also congratulated all the people of Bangladesh, especially in Narayanganj, as the NCC poll appeared as a great example.

She also extended her gratitude to the people of Narayanganj for electing her party’s candidate by voting in the symbol of “Boat”.

Sheikh Hasina, also the President of Awami League, however, directed the elected representatives to act responsibly towards the people without thinking of their own pleasures.

She said the BNP always spreads propaganda because the party leaders don’t see their faces in the mirror.

At the function, Local Government, Rural Development (LGRD) and Cooperatives Minister Md Tazul Islam also administered the oath to the newly-elected 36 councillors, including 9 councillors of reserved seats present in-person at the swearing-in ceremony.

The NCC election was held on January 16 last as Awami League candidate Selina Hayat Ivy was elected mayor for the third consecutive term.

She beat her nearest rival Taimur Alam Khondker by 66,535 votes in the election.

Ivy, with the symbol “Boat”, secured 1,59,097 votes to win against independent aspirant Taimur Alam Khandakar, who bagged 92,166 votes with the “Elephant” symbol.