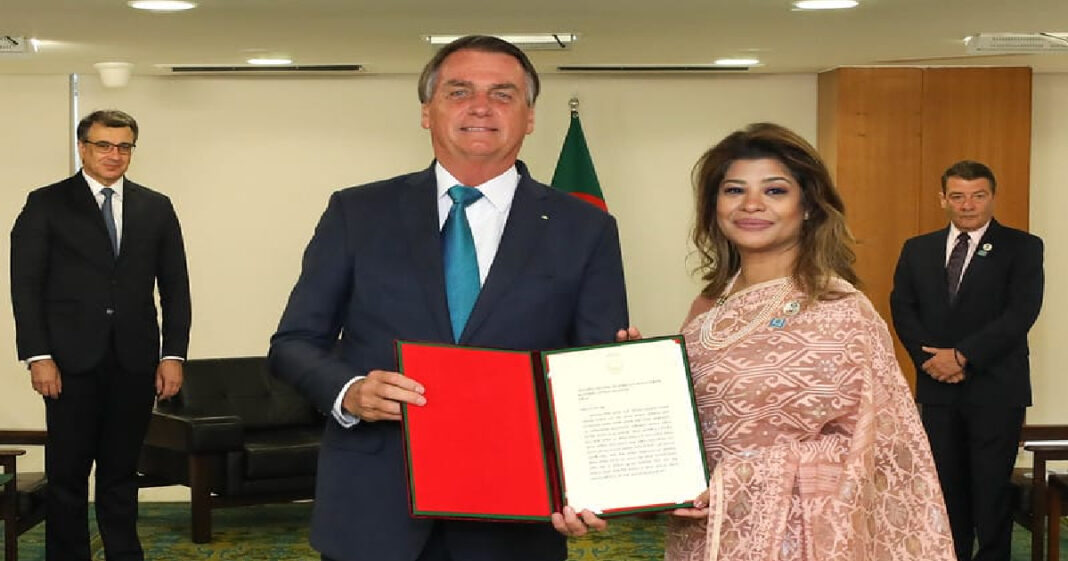 Bangladesh has shown interest in signing a free trade agreement (FTA) with Mercosur, an economic and political bloc of the big economies of South America consisting of Argentina, Brazil, Paraguay and Uruguay.

The Brazilian President instructed Brazilian Foreign Minister Carlos Franca to start working towards strengthening bilateral cooperation, including trade and agriculture, according to the Bangladesh Embassy in Brazil.

The Brazilian President promised for his support in further enhancing the trade relationship with Bangladesh.

Earlier, Bangladesh Ambassador to Brazil Sadia Faizunnesa presented her letters of credence to the President of Brazil on Thursday.

Mentioning Brazil as one of the largest democracies in the world, President Bolsonaro said his government is eager to strengthen its relationship with all friendly countries, including Bangladesh.

Ambassador Sadia Faizunnesa conveyed the warm greetings of the President and Prime Minister of Bangladesh to the Brazilian President.

On behalf of the Prime Minister, she invited the Brazilian President for an official visit at his convenience to commemorate the Golden Jubilee of Bangladesh.

The Ambassador also briefed the Brazilian President about the celebration of the birth centenary of the Father of the Nation Bangabandhu Sheikh Mujibur Rahman.

She requested President Bolsonaro for his support to further expand the trade, economic and agriculture cooperation between our two countries.

The Brazilian President was delighted to learn about the popularity of the Brazilian football team in Bangladesh.

The Ambassador said Bangladesh looks forward to deeply engaging in a multitude of ways with Brazil and to gain a thrust momentum in the partnership there is no alternative to an exchange of VVIP visit.

President Bolsonaro was enthusiastic about visiting Bangladesh, and he promised that his government would continue working with Bangladesh to further strengthen the friendly relations between the two countries.

During her departure from the Planalto Palace Ambassador Sadia Faizunnesa received a guard of honour.

Immediately following the ceremony, the Ambassador returned to the chancery and paid homage to Bangabandhu Sheikh Mujibur Rahman by placing a floral wreath at the portrait of the Father of the Nation.