Coast Guard to be modernised for new responsibilities: PM 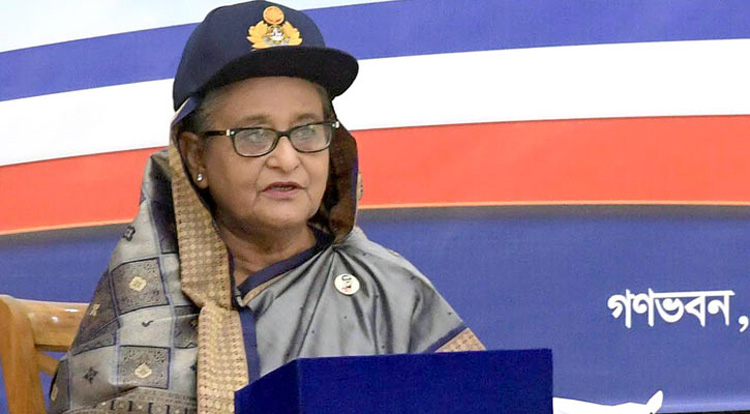 Prime Minister Sheikh Hasina on Tuesday said her government is making Bangladesh Coast Guard as a modern and up-to-date force to enable it for carrying out more new responsibilities in the future.

“Our government is working tirelessly to build the capacity of the Bangladesh Coast Guard (BCG) through its own manpower recruitment activities and force restructuring,” she said.

She said the high-tech ships, hovercrafts and high-speed boats will soon be added to the force to modernize and strengthen Coast Guard.

Moreover, initiatives are being taken to establish a digital connection with Bangabandhu Satellite-I to bring a groundbreaking change in the communication system of the force in the deep sea, she added.

“Coast Guard will be able to meet the challenges of the 21st century with the incorporation of these modern technology-enriched ships and developed communication systems,” she hoped.

Sheikh Hasina said the role of Coast Guard is increasing for maintaining the overall law and order situation in the vast coastal areas and marine waters, protecting fisheries, ensuring security of the country’s seaports, anti-smuggling and anti-drug operations, as well as protecting life and property of coastal people during natural disasters.

Mentioning that Awami League (AL) government has always been directly involved in the formation and development of Bangladesh Coast Guard, she said it had emerged as a force in context of a bill brought by AL in the Jatiya Sangsad in 1994 as the then opposition party.

Assuming power in 1996, she said, AL government took a massive initiative in expanding Coast Guard’s activities in the country’s coastal areas by providing land for its various zones, different types of vessels and building
infrastructure.

Following this, she added, since 2009 various infrastructures including coastal crisis management center, accommodation of officers and sailors of bases, officers’ mess, sailors’ quarters and administrative buildings have
been constructed at Coast Guard stations and outposts in coastal and remote areas of the country.

The prime minister said the training capacity of Coast Guard’s manpower has been strengthened through establishment of its own training base “BCG Base Agrajatra” in Patuakhali region.

In addition, a total of 77 ships and vessels of different sizes have been built and incorporated to the force in the last 13 years of her government, she said.

Besides, two inshore patrol vessels, a floating crane, two tug boats and 16 other boats have been shaped for the Coast Guard at Narayanganj Dockyard and Khulna Shipyard run by the Bangladesh Navy, she added.

Sheikh Hasina said a dockyard is also being built in Gazaria for the construction, repair and maintenance of the force’s vessels and ships.

She opined, “I think the ability to build a ship in our own yard will strengthen our confidence.”

Referring to the 9 ships and a base of Bangladesh Coast Guard simultaneously commissioned by her in the last year, she said, “Incorporation of these vessels has opened a new chapter for the organisation.”

In addition, the Coast Guard has been given approval for construction of four more OPVs and nine replacement ships for deep sea patrol, she revealed.

Sheikh Hasina said, “We’ve consistently bolstered the strength of the Coast Guard as Awami League has been in power since 2009.”

In order to provide security to the economy and deep sea, she said, plans have been taken to further increase the ships, equipment and manpower as per the vision of this force-2030 and 2041.

She said, “I believe that Bangladesh Coast Guard will play an important role in keeping the deep sea dependent economic activities dynamic and secure.”

She also hoped that the force will greatly contribute to securing the projects related to the blue-economy and maintaining security of life and property of individuals.

She praised the role of Coast Guard in preventing Jatka fishing and protecting mother hilsa.

The prime minister urged the BCG personnel to uphold the reputation and dignity of the force by performing duties with patriotism, honesty and faith.

She hoped that every member of the force would properly carry out the responsibility for ensuring the security of the sea and coastal areas of the country.

She also assured them (Coast Guard personnel) that her government would extend all necessary assistance for their welfare.

Recalling the initiative of Father of the Nation Bangabandhu Sheikh Mujibur Rahman, Sheikh Hasina said Bangabandhu framed “the Territorial Waters and Maritime Zone Act” in 1974 to establish the legal rights of countrymen over the sea and marine resources.

Bangladesh is the first country in South Asia to pass such a law, she added.

Mentioning that even United Nations (UN) formulated such law in 1982, she said until adoption of the law by the UN, the cases, not only in the region but also in Europe and other places across the globe, would have been settled down following the law enacted by Bangabandhu.

At the ceremony, on behalf of the prime minister, Home Minister Asaduzzaman Khan, MP handed over medals to four Coast Guard personnel for their bravery and special achievements.

A short video documentary on Coast Guard’s activities was screened.

A smartly turned out contingent of Bangladesh Coast Guard also gave a state-salute to the premier.