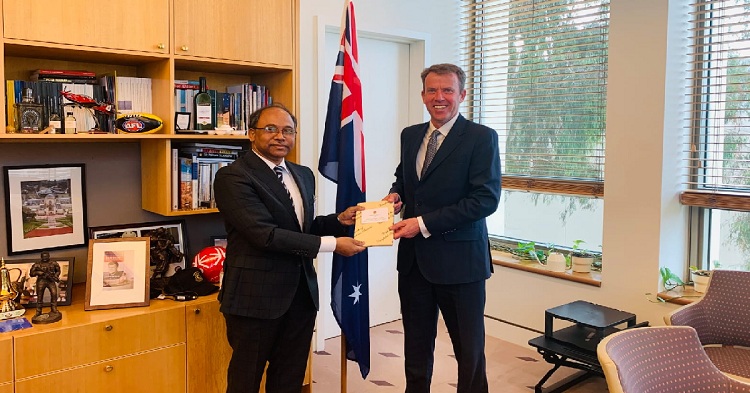 Bangladesh and Australia have discussed ways to expand trade and identify scopes for investment between the two countries that eye to emerge as key trade partners, reports UNB.

Bangladesh High Commissioner to Australia Sufiur Rahman had a “fruitful” meeting with Australia’s Minister for Trade, Tourism, and Investment Dan Tehan at his parliament office on Thursday and expressed their confidence to realise immense potentials so as to emerge as key trade partners.

The meeting was held ahead of the upcoming Joint Working Group’s (formed under Trade and Investment Framework Arrangement signed on September 15, 2021) meeting scheduled to be held on February 22 in Canberra.

They expressed that the JWG would operationalise TIFA beyond optics, and advance trade and investment interactions for mutual benefit.

Australia has recently announced to commission multiple studies to identify key opportunities in Bangladesh for Australian businesses in the infrastructure, IT, mining, and other potential sectors, that the Bangladesh High Commission has repeatedly been advocating for the last three years.

The meeting was attended by Gary Cowan, First Assistant Secretary North and South Asia Division, Department of Foreign Affairs and Trade and Lachlan Smith, Adviser to the Minister.