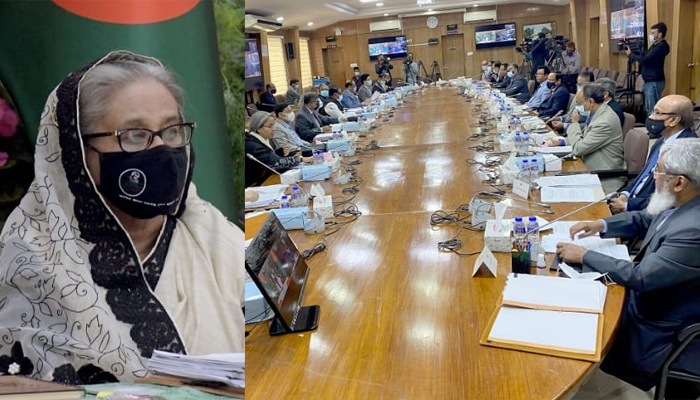 Prime Minister Sheikh Hasina on Sunday promised to spread further the great Bangla, its literature and the country’s culture and heritage across the world as Bangladesh’s rich diversity has its own strength.

“Our efforts will be to spread Bangla language, literature, culture more in international arena and I believe that we will be successful in that,” she said, reports UNB.

The Prime Minister said this while distributing the Ekushey Padak, the country’s second highest civilian award, among 24 eminent personalities in recognition of their contributions to various fields.

The programme was held at the Osmani Memorial Auditorium. The Prime Minister joined it virtually from her official residence Ganobahban.

Liberation War Affairs Minister AKM Mozammel Huq distributed the prestigious award among the recipients on behalf of the Prime Minister.

The Prime Minister also said the government has been working relentlessly to change the fate of the grassroots level and deprived people. “More importantly, we want to attain economic emancipation.”

She said Bangladesh is advancing and will continue its journey towards prosperity.

Briefly describing the struggle of the country’s Independence from Language Movement, Hasina said that sacrifices of many people have made the Bangladesh independence possible.

“Independence does not come through a sudden declaration of any person, that did not come, the Independence came through the journey of the struggle. And that struggle launched by Father of the Nation Bangabandhu Sheikh Mujibur Rahman,” she added.

The PM went on saying, “The contribution of him (Father of the Nation Bangabandhu Sheikh Mujibur Rahman) is the independent Bangladesh and this country emerged as a country of a Nation.”

Recalling the efforts to erase the contributions of Bangabandhu after his assassination in 1975, Hasina said his contributions to the Language Movement and Liberation War had also most been erased. “But the reality is, no one could erase the truth and history.”

Congratulating the awardees, the Prime Minister said the new generation will come forward to devote themselves to the welfare of the country and its people following their footsteps.

Cabinet Secretary Khandker Anwarul Islam conducted the award-giving ceremony and read out the citations of the recipients, organised by the Ministry of Cultural Affairs.