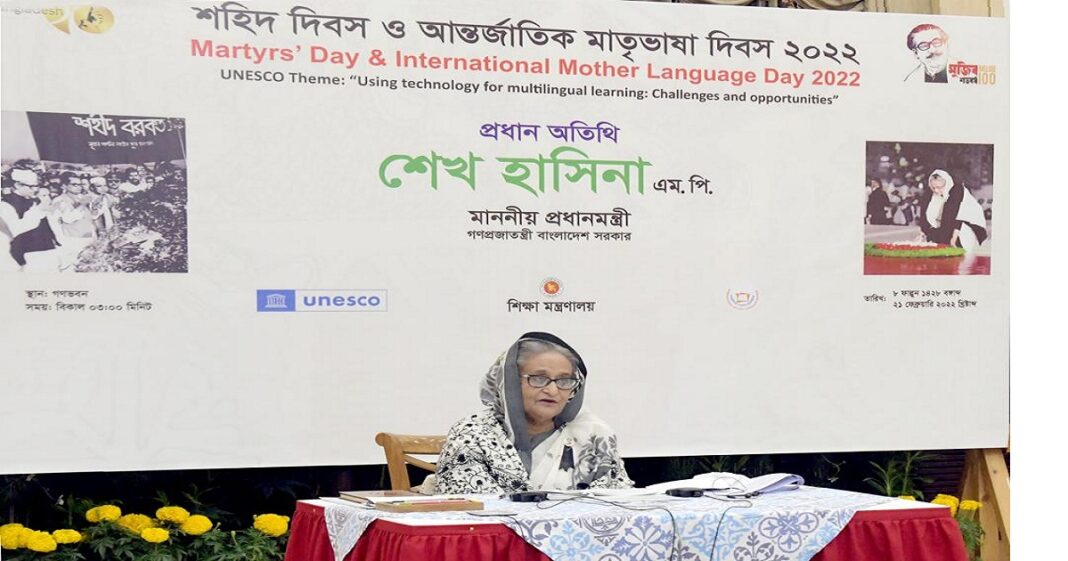 Prime Minister Sheikh Hasina on Monday called for simplifying the use of scientific terminology in Bangla to attract more students to study science.

She said that Bangladesh has to go with the science and the country can’t reverse its wheels.

“We have to pursue technological education. We can’t advance without it,” she said.

Sheikh Hasina said that Science based education, science based research and the knowledge based on the research must be used for the welfare of the people and that is the most important matter.

“Research in every sector, including health, education, science and even in industry is of utmost importance,” she said.

Regarding the uses of scientific terminology, she said that use of a tough terminology in Bengali language of a scientific word might not be understandable for all.

“Widely used words and internationally accepted words that can be used as it is, we have to accept the word that is used widely in the international arena,” she said.

In this connection, she said that using tough terminology could bring non-understandable situation and that should be avoided.

“I do not believe in using terminology or translation everywhere,” she said.

The PM said that in science there are many words inducted from many languages included English, French and many others.

She also said that in Bengali language there are about 8000 foreign words inducted.

“We should not be so much conservative in this regard, the commonly used scientific terms can be used in Bengali language for easy learning of science,” she opined.

Sheikh Hasina said that to transform the country from developing to developed, practice and research in all subjects including language, literature, culture and science is urgently needed.

“Keeping eyes on that we are trying to do our works,” she said.

Focusing on the history of the Language Movement, she said although the February 21, 1952 saw the tragic incident, the movement for mother language began much earlier.

At the proposal of Bangabandhu, she said, the State Language Action Council was formed comprising Chhatra League, Tamuddin Majlish and other student organisations in 1948.

Education Minister Dipu Moni, Deputy Minister for Education Barrister Mohibul Hasan Chowdhury Nowfel and Head of the Office and UNESCO Representative to Bangladesh Beatrice Kaldun spoke, among others, on the occasion.

Professor of the Department of Robotics and Mechatronics Engineering, University of Dhaka Dr. Lafifa Jamal presented the keynote speech, while Secretary of Secondary and Higher Education Division of Education Ministry Md Abu Bakar Siddique gave the welcome address and Director General of the International Mother Language Institute Md. Belayet Hossain Talukdar delivered the vote of thanks.

At the outset of the programme, one minute silence was observed to show respect to the language movement heroes for their sacrifice.