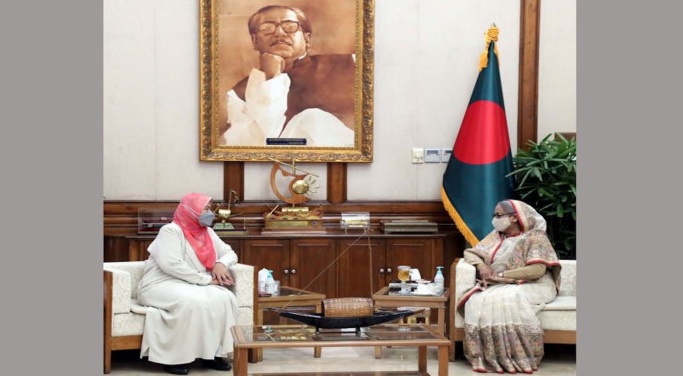 She said this while paying a courtesy call on Prime Minister Sheikh Hasina at the latter’s official residence Ganabhaban in Dhaka.

The Malaysian minister also discussed about the proposal whether the recruitment can be done through Government-to-Government (G2G) channel.

In the meeting, she said that they want to recruit in this way to ensure transparency and systematic ways for plantation industry sector as per Memorandum of Understanding (MoU) signed already between the two countries.

With the proposed recruitment system, the Malaysian minister said they want to make sure basic rights and facilities, including decent accommodation and salary for the workers as well as to make the recruitment process easier, transparent and hassle-free.

She also opined to introduce a tracking system to oversee the workers.

Zuraida Kamaruddin said Malaysia hoped that the existing bilateral relations between the two countries will be strengthened further.

In reply, Prime Minister Sheikh Hasina described it as a good proposal and also hoped the bilateral relations with Malaysia would be stronger in the days to come.

The Malaysian minister lauded the Prime Minister for her successful Covid-19 pandemic management.

She said Sheikh Hasina is an important achievement for all the global women as what she said the Prime Minister is one of the most influential women leaders in the world.

In this regard, Sheikh Hasina thanked the Malaysian government for extending their vaccination support to Bangladesh and conveyed good wishes to the Malaysian prime minister.

Zuraida also conveyed the greetings of the Malaysian Prime Minister to the Bangladesh Premier.