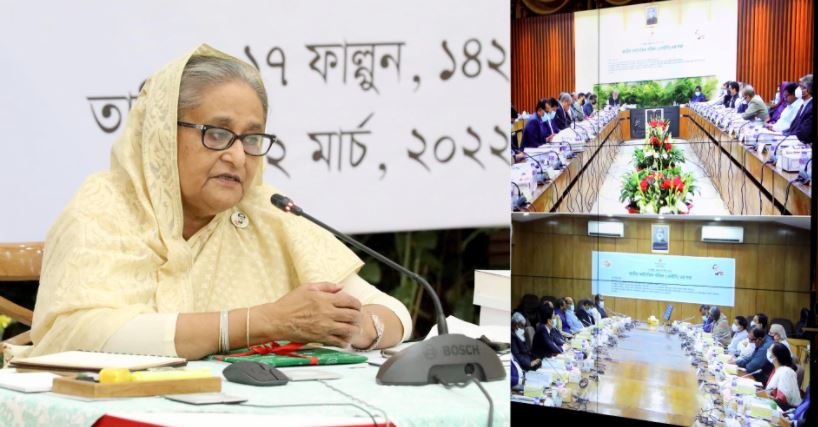 Prime Minister Sheikh Hasina on Wednesday reiterated her vows to provide an improved and developed life to the countrymen through implementing the spirit and ideology of the War of Liberation.

“I am working towards a goal cherishing the pain of losing relatives. I have to implement the ideals with which my father had made the country independent. It’s my promise. And, I will do it,” she said.

The premier made this remarks at the outset of the meeting of National Economic Council (NEC) at NEC conference room in the city, reports BSS.

She joined the meeting virtually from her official residence Ganabhaban here.

The prime minister said her lone goal is to ensure socio-economic development of the country’s people and improve their lives.

She added: “I want to make the people’s life beautiful and dignified so they can be able to move with their head high in the world and this is what, the Father of the Nation always wanted and used to say.”

Referring to the country’s progress in the last 13 years, Sheikh Hasina said Bangladesh now attained the status of developing country.

“We will move forward as a developing country and also will be a developed one in the future,” she said.

She continued that, “All I can say is that now none looks at Bangladesh with sympathy, rather looks with respect.”

The prime minister also highlighted the significance of this eventful month including the historic speech on March 7, Bangabandhu’s birthday on March 17 and Independence Day on March 26.

Mentioning that this month is very important as in this month Bangabandhu Sheikh Mujibur Rahman, the greatest Bangalee of all time, was born, she said, “Bangabandhu gave the nation freedom and self-dignity as an independent country.”

Recalling the contribution of Bangabandhu in rebuilding the war-torn Bangladesh, Sheikh Hasina said following his footsteps, her government has taken plans and is implementing those accordingly.

“We are taking Bangladesh forward following his (Bangabandhu) ideals,” she said.

She also highlighted that Bangladesh’s economy is moving forward even in the time of Corona pandemic.

“We have been able to keep our economy afloat even during the global economic downturn in the period of Covid-19,” she added.

In this connection, the premier also extended her gratitude to the people of Bangladesh for working sincerely even during this difficult time to attain the success.