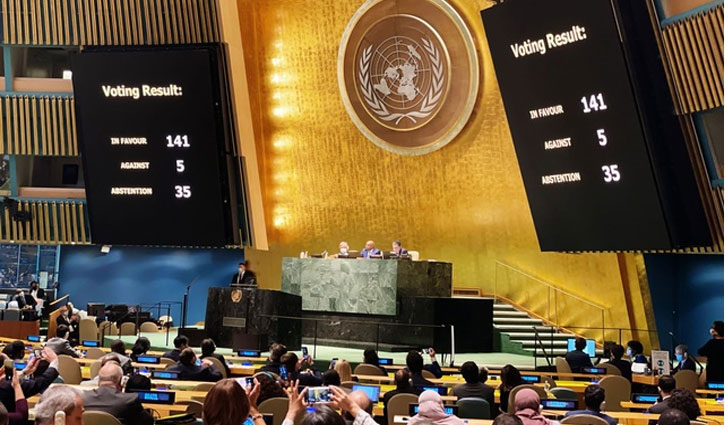 The vote on the “Aggression against Ukraine” resolution was 141-5, with 35 abstentions.

The abstentions included China, as expected, but also some surprises from usual Russian allies Cuba and Nicaragua, reports AP.

Only Belarus, Syria, North Korea and Eritrea joined Russia in opposing the measure.

Unlike Security Council resolutions, General Assembly resolutions are not legally binding, but they do have clout in reflecting international opinion.

Under special emergency session rules, a resolution needs approval of two-thirds of those countries voting, and abstentions don’t count.

Few days ago, Bangladesh urged for restraint by all parties and to immediately resume diplomatic efforts and dialogue in order to settle all disputes by peaceful means, and refrain from taking any action that may endanger international peace and security.

“Bangladesh expresses its full support and confidence in the good offices of the Secretary General of the United Nations, and calls upon him to undertake all efforts to initiate dialogue with a view to ending the hostilities and military operations in Ukraine,” said the Ministry of Foreign Affairs in its statement.