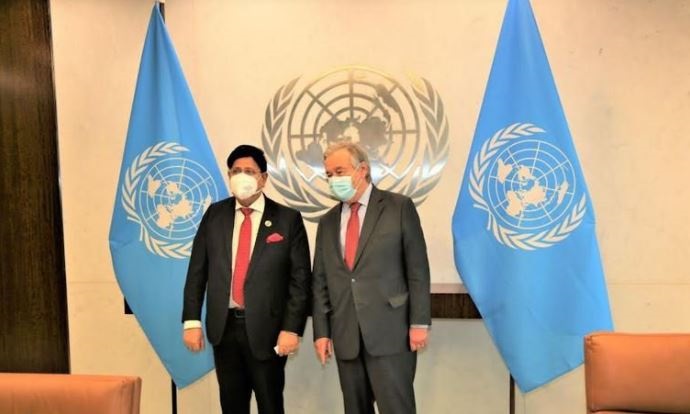 United Nations secretary general Antonio Guterres has praised the role of Bangladeshi peacekeepers in the UN Missions and hoped that the country would continue to provide more troops to fulfill UN’s future needs in this connection.

The UN secretary general lauded the Bangladeshi peacekeepers role when he met Bangladesh foreign minister Dr AK Abdul Momen at the UN headquarters in New York on Tuesday, according to a message received here on Thursday, reports BSS.

During the meeting, Foreign minister AK Abdul Momen requested the SG to appoint more Bangladeshi nationals at the high-level positions of the UN peace operations, and also in the position of SRSG (Special Representative of Secretary General) in various UN political missions across the world.

The foreign minister briefed the SG about the current situation of the forcibly displaced Myanmar nationals and sought UN’s help to repatriate all Rohingyas to Myanmar.

Guterres applauded Bangladesh’s extraordinary socio-economic development under the visionary leadership of Prime Minister Sheikh Hasina and hoped that Bangladesh would continue to achieve more successes in the coming years, particularly in attaining the SDGs.

Earlier, the foreign minister held a meeting with the newly appointed Special Envoy of the Secretary General (SESG) on Myanmar Dr. Noeleen Heyzer, who is currently visiting New York.

During the meeting, Momen requested the SESG to engage with all stakeholders including the regional countries to find a durable solution to the Rohingya crisis, particularly by creating a conducive environment in Rakhine state so that the displaced people can return to their homes in safety, security and dignity.

Heyzer assured that the Rohingya issue will remain high on her agenda and she would remain deeply engaged with all relevant stakeholders – the regional countries and other international actors, Rohingya leaders and the authorities in Myanmar to find a sustainable solution to this crisis as soon as possible.

The special envoy expressed her gratitude to Prime Minister Sheikh Hasina for providing shelter to the Rohingya when they fled Myanmar in 2017 and commended her for her compassion and leadership.

Foreign Minister stated that, in the absence of any hope for return to their homeland, the Rohingyas increasingly have been getting involved in illicit and criminal activities.

Momen also briefed her on the steps taken by the Bangladesh government to prevent spread of COVID in Rohingya camps, to provide Myanmar-curriculum-based education to Rohingya children in the camps, among others.