Bangladesh 50 at British Museum: An event to remember 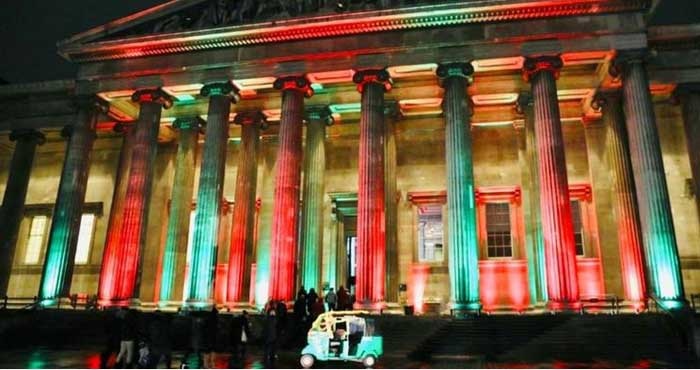 The golden jubilee of Bangladesh’s independence was marked by the Bangladesh High Commission in the UK and the borough of Camden with an event at the British Museum in London recently.

This is the first time that Bangladesh’s independence has been celebrated at the British Museum, the High Commission said in a press release on Saturday, UNB reports.

As part of the event, the British Museum was illuminated in the colours of Bangladesh’s national flag — red and green.

Speaking on the occasion, Bangladesh High Commissioner to the United Kingdom, Saida Muna Tasneem, said that “50 years ago, the people of Bangladesh made supreme sacrifice and shed blood to earn our freedom and independence under the charismatic leadership of Father of the Nation, Bangabandhu Sheikh Mujibur Rahman, who founded Bangladesh as a democratic, secular, progressive and inclusive people’s republic”.

“Today, Bangladesh’s emergence as one of Asia’s most prosperous and resilient nations under the visionary leadership of Prime Minister Sheikh Hasina continues to be guided by our 1971 War of Liberation values,” she said.

Expressing deep gratitude towards the enterprising British-Bangladesh community in the UK, the High Commissioner said “the British-Bengali Community built the most invincible overseas front of the Bangladesh War of Liberation in 1971 and continues to remain the strongest pillar of connectivity and historic friendship between our two commonwealth nations”.

Leader of Opposition and local MP member Sir Keir Starmer, who was present at the event, said, “Bangabandhu, the Founder of Bangladesh, had a very special relationship with Labour Prime Minister Harold Wilson that epitomized the close bonds between our two countries. Under my leadership, the Labour Party will continue to deepen and strengthen this link.”

He also recalled his visit to Bangladesh in 2016 and expressed hope for revisiting again.

The Labour leader also inaugurated a commemorative art exhibition on ‘Bangabandhu and Britain: Bangladesh 50 at the British Museum’, organised by the High Commission to mark the Birth Centenary of Bangabandhu.

Speaking at the event, Mayor of London Sadiq Khan said that UK citizens and the diaspora community played an important role in Bangladesh’s independence in 1971 “and continue to play a significant role in the great relationship between our two countries”.

“In London, those of Bangladeshi heritage have made and continue to make a hugely positive contribution,” he said.