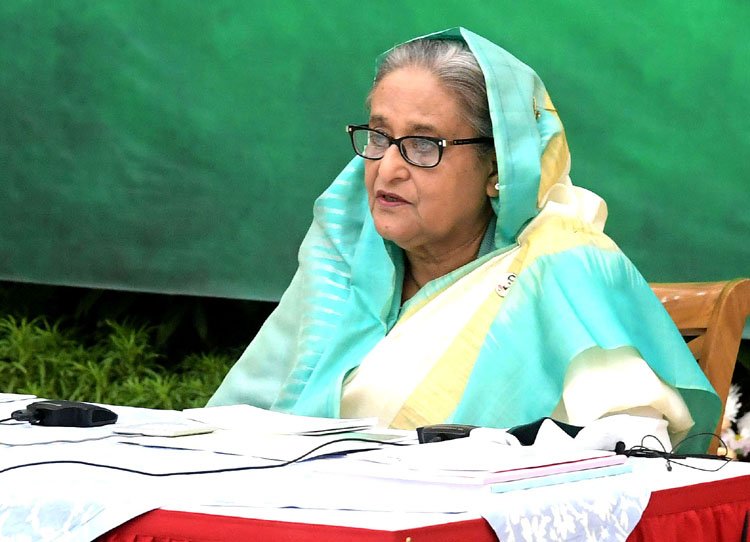 “Attention should be given on keeping the footpaths free from illegal occupation to make those suitable for pedestrian movements while formulating plans by engineers and architects,” she said.

The premier said this while inaugurating development works of road, drainage system and others activities in the newly incorporated 18 wards of Dhaka North City Corporation (DNCC) at Kanchkura High School Field in Ward no-44 here.

She joined the ceremony virtually from her official residence Ganabhaban.

The prime minister said that the densely populated Dhaka city should be made modern, greener and livable as much as possible.

Mentioning that many parks and play grounds were occupied earlier, she said those are being reshaped in a beautiful manner after removing the illegal occupations.

The premier greeted the authorities concerned to take the measures of upgrading the newly inducted 18 wards of Dhaka North City Corporation.

She said many places of the newly inducted wards are densely populated and of them Harirampur is the most populous.

The prime minister said the roads and drains of the areas should be built “beautifully” and maintained hygiene and made more livable.

She added: “I believe the newly inducted places of the Dhaka city corporation will be more beautiful and developed.”

Sheikh Hasina said once there were a lot of canals in the Dhaka city, which were damaged due to introduction of the box culvert system.

She criticised that some people touted canals as their ajmali (joint) properties and build several establishments such as houses and shops by occupying those illegally.

The prime minister said her government has a plan to ensure a better life for stranded Biharis considering the humanitarian ground despite the fact that they had chosen to go to Pakistan after independence.

The premier added that they want to do something for the Biharis as their several generations were born in this country.

She went on saying that they wanted to go to Pakistan and take Pakistani citizenship after the independence, but Pakistan never accepted them.

Noted that stranded Biharis are living in different areas of the country including Dhaka, she said many organisations collected huge amount of money for them.

“But their fate did not change at all,” she continued.

They (Biharis) are now living in Bangladesh with their children and grandchildren and they are leading an inhumane life in the small place in Geneva Camps, she said.

The prime minister described the Biharis as very much diligent and said they have the skill to do various types of works.

“For that, I wanted to arrange a good accommodation for them and engage them in the jobs in which they gained their skills,” she said.

“But, this can not be done in Dhaka and for this, a convenient place is needed where there are industries or scope of jobs for them,” she added.

Her government is working for creating scope of employment for them, so they can lead a good human life at least, Sheikh Hasina said, adding: “That is what I want”.

“We are developing rail, road and air communications so that people can easily go back to their home after completing their job,” she said.

Sheikh Hasina said a land of ten bighas was found out to build a playground in Gulshan area.

The prime minister reiterated her call to the countrymen to maintain austerity in using electricity and water as the government is providing huge amount of money as subsidy.

She said that they are giving the subsidy aimed at improving the standard of the people’s life.