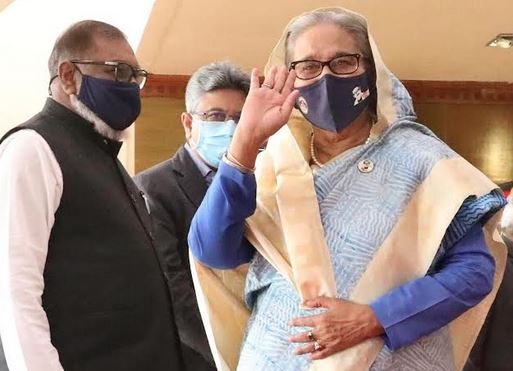 The aircraft is scheduled to land at the Abu Dhabi International Airport, UAE at around 20pm local time.

During her bilateral visit, both the countries are eyeing to elevate the existing relationship to a comprehensive partnership with deeper political engagement.

Trade and commerce, investment, manpower and cooperation in other’s potential areas will be prioritised during this visit.

Foreign Minister Dr AK Abdul Momen yesterday in a media briefing said 4-5 Memorandum of Understandings (MoUs) are likely to be signed between Bangladesh and the UAE during Prime Minister Sheikh Hasina’s visit to the oil-rich country.

During her stay in the UAE, the premier is scheduled to visit Dubai Expo at Dubai Exhibition Centre (DEC) on March 8 and also join a high level panel discussion on the occasion of International Women Day. Later, she would visit Bangladesh Pavilion and UAE Pavilion at the DEC.

At the evening, she would join a dinner to be hosted by Bangladesh Ambassador to the UAE Md Abu Zafar.

The prime minister is also expected to join FAO Regional Conference for Asia and the Pacific in the morning, while business forum in the evening on March 10 jointly organised by the UAE and Bangladesh business delegation.

In the last day of her visit on March 11, Sheikh Hasina would attend a civic reception to be hosted by expatriate Bangladeshi community.

On March 12, the premier is scheduled to return home by a VVIP flight of Biman Bangladesh Airlines, BG-1302.