Youths can’t be kept in darkness about true history of country: PM 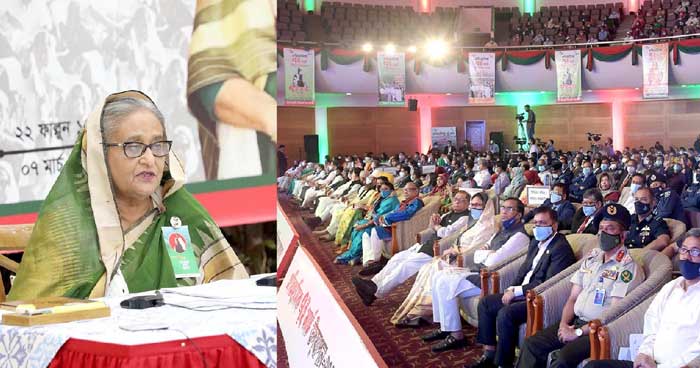 Prime Minister Sheikh Hasina on Monday said in this era of technology the young generations can’t be kept in the dark about the real history of the country, its independence, the sacrifice of the Father of the Nation and the bloodshed of millions of martyrs.

“In the era of technology there is no scope to push them (new generations) to the regime of darkness again,” she said this while addressing a programme celebrating the Historic March 7 speech of Bangabandhu Sheikh Mujibur Rahman.

The Cultural Affairs Ministry organised the programme at Bangabandhu International Conference Center (BICC) while the prime minister joined it virtually from her official residence Ganobhaban.

She said that no one will be able to foil the independence of the country and no one can destroy the ideology of Bangabandhu.

“The world is very much open to the new generations, so they cannot be confused anymore,” she said.

She also mentioned that vested quarters was able to mislead the young generations for 21 years after the assassination of Bangabandhu.

“But that cannot be done now, this is my firm belief,” she said.

The PM said that Bangabandhu’s historic speech of March 7 will encourage the Bangalis decades after decades.

She recalled that after the assassination of the Father of the Nation the speech was banned by the killers so no one can broadcast and listen to it..

She said it was unfortunate that the speech that inspire the Bangalis to gain independence was banned. .

In this connection, she said that many leaders and activists of Awami League and Chatra League had been tortured and killed for playing this speech.

She mentioned that the anti-independence regime distorted the history of the Independence for long 21 years.

“There were attempts to erase the spirit of the Liberation War, bloodshed of millions of martyrs and struggle of the people from the history. Now this is proved that no one can erase the truth,” she said.

“This speech will remain as an eternal speech in the world,” she added.

“This speech still motivates us to go forward and free the country from oppression and deprivation,” she said.

At the beginning of the programme Bangabandhu’s iconic March 7 speech was played.