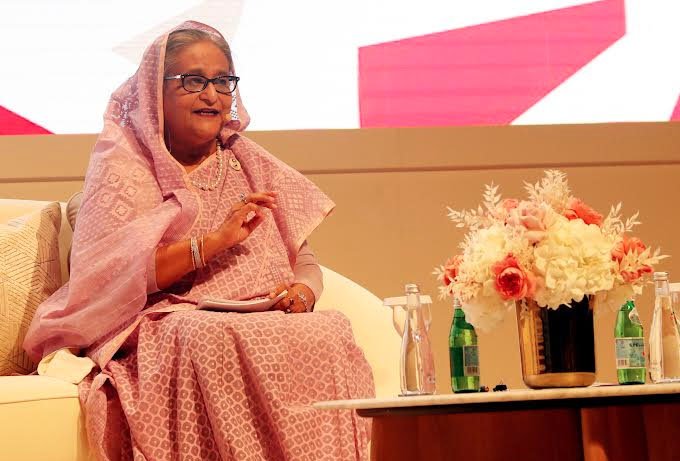 Prime Minister Sheikh Hasina today said people must extend support to a leader when the country is run with motherly affection like her in Bangladesh.

“One thing should be comprehended that women are not merely women, women are mothers, so if you (leader) run a country with motherly affection, definitely people will support you,” she said.

The Premier made this remark while talking to a high-level panel titled “Redefining the Future for Women,” at the Women’s Pavilion in the Dubai Expo- 2020 at Dubai Exhibition Centre on the occasion of The International Women’s Day.

Pointing out the basic objective of her government’s success, she told the audience that people of Bangladesh have extended their supports to her as they realised they would be benefited and they would get development.

Sheikh Hasina said she achieved support and faith from the people that is her main strength, and added “The people realised that if I am with them, they definitely would be beneficiaries.”

But, it was not that much easy, she said, adding that her entire family — including father, mother, three brothers and two sister- in-laws — were assassinated in Bangladesh and only she and her younger sister survived the assassination.

The Prime Minister said when she had returned home after the assassination, the killers of her family and war criminals were in power. “So, my journey was not very smooth,” she said.

She said that time and again she faced killing attempt and propaganda but she did not care for that. “I thought that I have to work for the people,” she added.

She also appreciated her male colleagues for cooperating her in the politics and government. “I must appreciate them. They immensely cooperated with me,” the premier added.

Talking about a unique situation in Bangladesh Parliament in terms of women empowerment, the Prime Minister said now the Speaker of the Jatiya Sangsad, the Leader of the House, the Leader of Opposition and Deputy Leader of House are women.

Mentioning that the military rulers ruled the government for about 21 years after the assassination of her family members, Sheikh Hasina said when she formed the government in 1996 she found that there were no women empowerment.

Then she took some initiatives for the women, including ensuring free education up to graduation level, tried to create job opportunities for them in the higher posts like judiciary, police and other national spheres.

Noting that women had narrow space during the military regimes, she said, “I opened up everything for women.”

Describing the Father of the Nation as her mentor, the PM said she knew the country and its problems from him.

“I knew the country and the problems. I learnt from my father, my father is my mentor. Not only that, I also learnt (from him) how to love my people and country as well as how to work for the poor,” she said.

The Premier on Monday arrived here on a five-day official visit to the United Arab Emirates (UAE) at the invitation of UAE Vice President and Prime Minister Sheikh Mohammed bin Rashid Al Makdoum, who is also the ruler of Dubai.