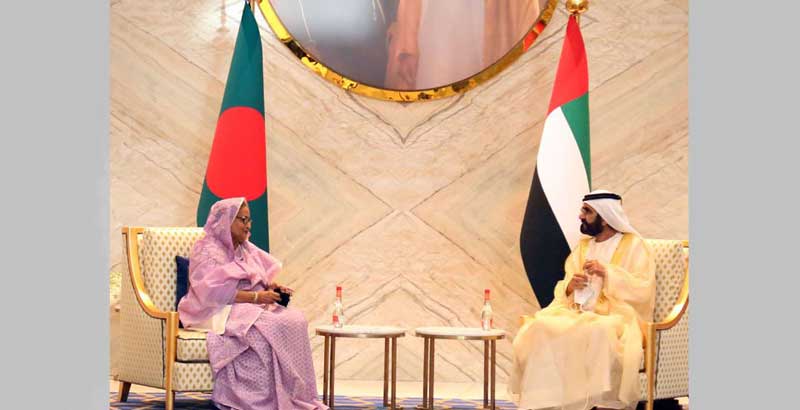 Bangladesh and United Arab Emirates (UAE) have agreed to further cement the existing bilateral relations between the two countries for mutual benefits.

Both the leaders led their respective teams at the meeting in Dubai Exhibition Centre.

Sheikh Mohammed bin Rashid Al Maktoum, who is also the ruler of Dubai, stressed the need for increasing operation of Emirates flights between the two countries.

In reply, Sheikh Hasina said her government is now constructing the 3rd terminal of Hazrat Shahjalal International Airport. “We’re trying to increase our capacity to this end,” she added.

She said the UAE has plenty of trade and investment scopes in Bangladesh.

The Bangladesh premier lauded the UAE government for successfully tackling the Covid-19 pandemic.

In this context, Sheikh Mohammed bin Rashid Al Maktoum appreciated the Bangladesh government, as telling to the prime minister that, “You have also done well (over Covid-19 management) ”.

When the Dubai ruler talked about the development of Bangladesh, the premier said, “We’ve a lot of scope for further development.”

The UAE prime minister extended sincere thanks to his Bangladesh counterpart Sheikh Hasina for visiting the UAE during celebration of the International Women’s Day.