PM for enhancing collaboration among Asia-Pacific countries for food security 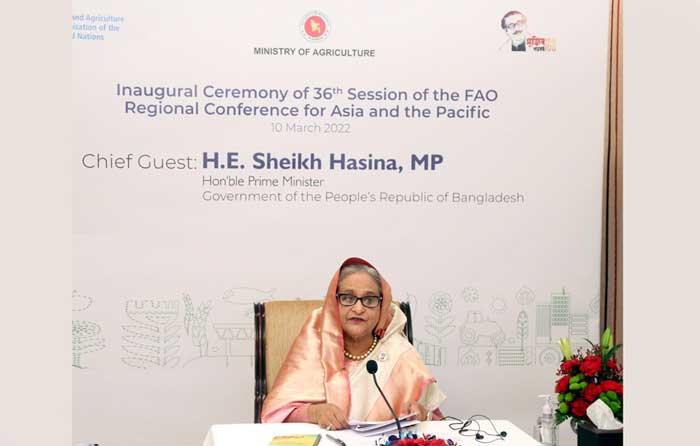 Prime Minister Sheikh Hasina on Thursday emphasised enhancing collaboration among the Asia-Pacific countries in agricultural research and education for ensuring food security alongside transferring and sharing of cutting-edge technologies.

“For ensuring food security . . . collaboration among the countries of the region in the field of agricultural research and education should be enhanced,” she said.

The premier said this in her first recommendation among three placed at the opening ceremony of the Food and Agriculture Organization (FAO)’s 36th Regional Conference for Asia and the Pacific, reports BSS.

She, in her second point, said transfer and sharing of cutting-edge technologies like bio-technology, nanotechnology, and robotics in agricultural sector needs to be strengthened among FAO member states in the
region.

In the final point, she added: “As modern agriculture needs huge investment, special fund could be created to finance and support the agri-sector.”

Bangladesh, for the first time, is hosting the regional virtual high-breed event. Prime Minister Sheikh Hasina joined it remotely from her place of residence here.

She said the COVID-19 pandemic has affected the agricultural sector like other sectors. At the initial stage of the pandemic in 2020, the supply chain was disrupted affecting both the producers and consumers, she said.

“However, our timely and effective interventions helped the sector recover fast. We took special measures, including mechanization, to ensure unhindered food production and supply of agricultural inputs,” she added.

Sheikh Hasina continued that the COVID-19 pandemic revealed how vulnerable human beings are in the face of such disaster, and it has also made surfaced how the human race by acting together can face such challenges.

She went on saying, “Food security is surely the most pressing issue for the people. About 305.7 million people in South Asia still suffer from hunger. We can arrange food for them easily if we all make sincere effort.”

Focusing on Bangladesh’s agriculture sector, the premier said although the relative significance of the agricultural sector in GDP has been diminishing in the country, the absolute contribution did not fall, but has rather increased and the agricultural GDP saw a 40 percent rise since 2005-06.

Despite the fall in its share, agriculture still remains the main source of employment, providing livelihood to 40 percent of the labour force, she said, adding that currently about 22.7 million people of which 45 percent are women are directly employed in the agricultural sector.

Mentioning that Bangladesh has made remarkable progress in the production of rice, vegetable, fruit, fish, meat, egg and milk production in the last 13 years, she said her country also became self-sufficient in rice production by producing nearly 38 million metric tons of rice a year.

In the world, the prime minister said, Bangladesh is ranked 2nd in jute and fresh water fish production, 3rd in rice and vegetable production, and 4th in tea production as well as stands first among the 11 Hilsha fish producing countries.

“These achievements have been possible due to continuous policy support and incentives provided by our government, as well as the efforts of our hard-working farmers,” she said.

She added that entrepreneurs have also created a thriving private sector where agriculture is growing and expanding.

The prime minister said, “Despite these successes, we realize that we have to do more for achieving food and nutrition security in the real sense. It is because these sectors are prone to shocks from nature and climate related abnormalities.”

Noting that Bangladesh is one of the most vulnerable countries affected by climate change, she said climate change is also a major threat to sustainable agriculture.

“Therefore, we have been implementing various adaptation and mitigation projects from our Climate Change Trust Fund to offset the impacts,” she added.

Bangladesh has also adopted the “Mujib Climate Prosperity Plan” and adopted the “Delta Plan 2100” to deal with the issues of climate change, she said. “Our scientists have developed flood, drought-resistant and salinity-tolerant crop varieties that can be grown in those difficult environments,” she added.

Highlighting that Bangladesh’s subsistence agriculture has also been transforming into commercial agriculture, Sheikh Hasina said, “We, therefore, need to put emphasis on diversification of food production through growing high-value food, and processing value-addition to the low-value foods.”

“In order to ensure sustainable production, we are converting to modern agricultural practices like mechanization, floating agriculture, rooftop farming, hydroponic and aeroponic farming and integrated farming,” she said.

Citing that the farmers were the most neglected in the society of Bangladesh, she said they even didn’t have easy access to banking system a decade ago.

During her first tenure, her government distributed Agricultural Inputs Assistance Cards to the farmers and made arrangement for them to open bank accounts, she added.

“Now about 20 million farmers are holding such cards and getting financial incentives for agricultural inputs, and farming loans that are being sent directly to their accounts. Even share-croppers are being given collateral-free agri-loans,” she went on to add.

The prime minister said her government has taken various steps to enable farmers to obtain all kinds of assistance by the use of digital technology.

She said her government has formulated visionary policies and laws for the development of agriculture, and for the welfare of farmers.

After Bangladesh’s independence, Bangabandhu Sheikh Mujibur Rahman called for a “Green Revolution” for the economic emancipation of farmers, said Sheikh Hasina, also the eldest daughter of the Father of the Nation.

During his three and a half-year in office, the premier said Bangabandhu introduced a host of measures to attain food autarky and rebuild the war-ravaged country.

“Let us together create a world that can eradicate poverty, hunger, war and human sufferings and achieve global peace and security for the well-being of humanity,” she said, quoting from Father of the Nation Bangabandhu Sheikh Mujibur Rahman’s maiden speech delivered at the 29th session of the United Nations in 1974.