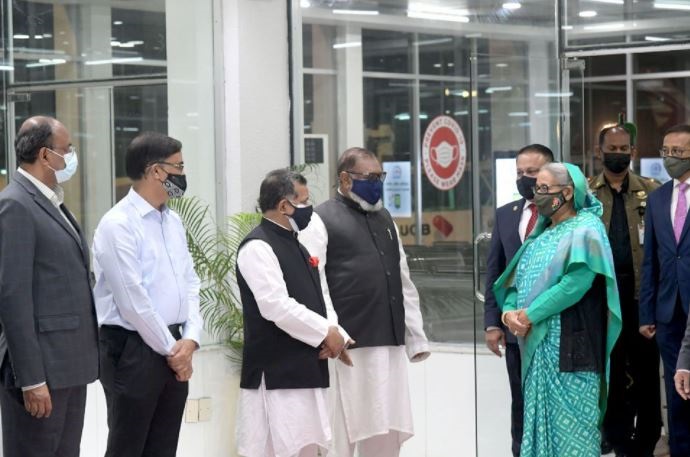 A static guard of honor was given to the prime minister on her arrival at the airport. Bangladesh Ambassador to the UAE Md Abu Zafar saw the premier off at the airport.

The premier had been the gulf country on March 7 at the invitation of UAE Vice President and Prime Minister Sheikh Mohammed bin Rashid Al Maktoum.

During her visit, Bangladesh and the UAE signed five Memoranda of Understanding (MoUs) in a bid to boost cooperation between the two countries.

During her stay in the UAE, the premier visited Dubai Exhibition Centre (DEC) on March 8 and also joined a high level panel discussion on the occasion of the International Women Day. Later, she visited Bangladesh Pavilion and UAE Pavilion at the DEC.

On March 9 evening, she attended a dinner hosted by Bangladesh Ambassador to the UAE Md Abu Zafar in honour of the premier.

The prime minister joined the FAO Regional Conference for Asia and the Pacific in the morning, while business forum in the evening on March 10 jointly organised by UAE and Bangladesh business delegation.

In the last day of her visit on March 11, Sheikh Hasina attended a civic reception accorded to her hosted by expatriate Bangladeshi community.