US-Bangladesh ‘partnership dialogue’ to be held on Sunday 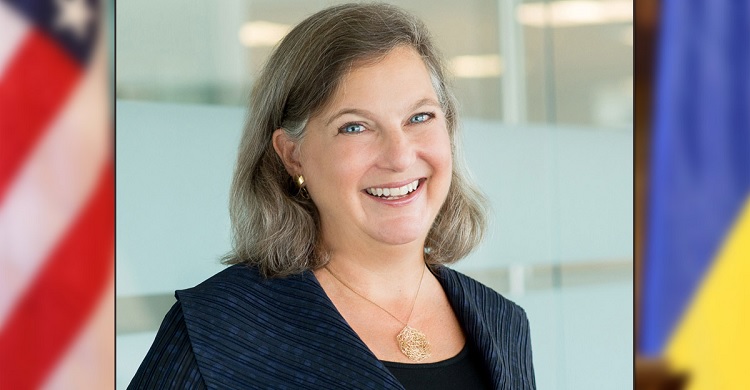 United States Under Secretary for Political Affairs Victoria Nuland is due in Dhaka on Saturday afternoon as Dhaka and Washington are set to hold their 8th partnership dialogue to deepen the ties coinciding with the 50th year of bilateral relations between the two nations.

Bangladesh Foreign Secretary Masud Bin Momen and Nuland will lead their respected sides during the dialogue to be held at State Guest House Padma on Sunday morning.

Nuland will arrive in Dhaka first as part of her tri-nation visit to South Asia includes India and Sri Lanka while Bangladesh foreign secretary is scheduled to receive her at Hazrat Shahjalal International Airport in the capital in the afternoon.

After holding the 90-min Partnership Dialogue, Bangladesh foreign secretary and the US under secretary will appear in front of the press for a joint briefing to reveal the outcome of their discussion at the state guest house.

The US Under Secretary is also scheduled to hold a meeting with Foreign Minister Ak Abdul Momen at foreign ministry.

Bangladesh foreign office and US diplomats in Dhaka said issues relating to trade and investment, labour, human rights and governance, global threats including climate change, regional issues including a free and ‘open Indo-Pacific region’ and security cooperation are to feature the dialogue.

This round of partnership dialogue got an extra spotlight as the US slapped sanctions on the Rapid Action Battalion and several senior officers of the force on December 10, 2021.

A foreign ministry official familiar with the partnership dialogue told BSS that Dhaka would raise the sanction issue at the dialogue strongly and describe the elite law enforcing unit’s success in curbing terrorism and drug trafficking.

He said Dhaka would also present evidences that the government took a number of actions against some individuals of RAB whenever it received complaints of human rights violations.

Regarding the sanction issue, a US diplomat stationed here said it would be one of the issues under the human rights agenda during the dialogue.

‘But this is the partnership dialogue, not the sanctions dialogue, So that’s one thing which is really important to keep in mind,’ the diplomat said this week while briefing a small group of journalists including BSS diplomatic correspondent regarding the dialogue.

He said the US wants to focus on ‘all of the other things that really bind us, we have a long history going back, we are on the eve of the fifty years of bilateral ties, we are looking forward to building strong foundation we going forward’.

The US officials said the US embassy in Dhaka, state department in Washington DC and Bangladesh foreign ministry were worked together to set the dialogue agenda.

One of the US embassy officials said the US side would not prioritise one issue over another at the dialogue as it is the platform to explore how Washington and Dhaka could build the partnership that already exists.

He said the US expects the dialogue to expand ‘the robust’ relationship with Bangladesh, coinciding with the 50th year of bilateral relations.

“In this 50th year of our diplomatic relations, the United States seeks to deepen a strong multi-faceted relationships built on mutual respect and shared interest,” said the US diplomat stationed in Dhaka.

The US diplomat said his country remained as a consistent partner in Bangladesh’s success stories while this dialogue and others scheduled bilateral engagements this year would demonstrate ‘our willingness to remain so in the future’ as well.

Besides, in December last, Washington asked Dhaka to inform in writing the consent to the Leahy Law that governs assistance for security cooperation.

Dhaka, however, is yet to respond to the US proposals while the US officials said these issues might come up during the dialogue.

The seventh Bangladesh-US partnership dialogue was held in 2019 when the US had pledged that it would provide additional security assistance for Bangladesh to increase maritime domain awareness, piracy, and regional security coordination in the Bay of Bengal.

The two countries have drawn up a series of engagements in coming months as part of which the US secretary of state Antony J Blinken invited Bangladesh foreign minister AK Abdul Momen to Washington to mark the 50-year anniversary of bilateral ties on April 4.

Officials said the Bangladesh-US partnership dialogue was sort of ‘umbrella’ platform while it is set to be followed by a second-round high-level bilateral economic consultation and an eighth security dialogue in Washington DC in coming months.