Sanctions on RAB a ‘complicated and difficult’ issue: Nuland 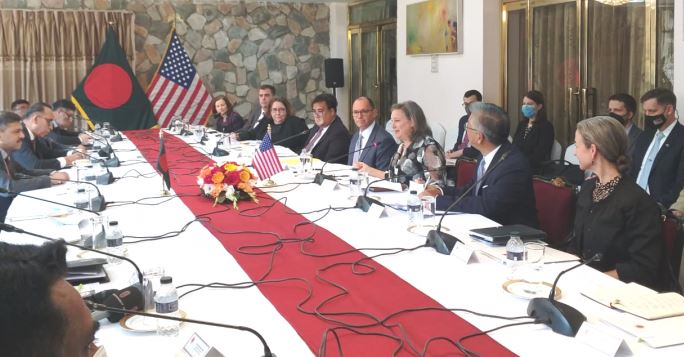 Washington on Sunday described the sanctions on Rapid Action Battalion (RAB) and seven of its current and former officers a “complicated and difficult” issue after Bangladesh pressed for withdrawal of it.

Bangladesh voiced its concern over the US Treasury Department’s move at the 8th ‘Partnership Dialogue’ with the United States in Dhaka, first such bilateral meeting after the sanctions were imposed on the country’s elite force last December.

US Under Secretary for Political Affairs Victoria Nuland, who led the US side, told a joint press briefing that sanctions are a complicated and difficult issue, though some progress were made over the last three months.

“I think this has obviously been a complicated and difficult issue. Here, we did discuss it today. We’ve seen progress in the last three months…,” she said.

With Nuland by his side at the briefing at State guesthouse Padma Foreign Secretary Masud Bin Momen said they have raised “deep concern” about the recent US treasury sanctions imposed on Rab and related individuals.

He said that Bangladesh side explained how this might affect the efforts of the government to combat terrorism and transnational crimes.

Dhaka told Washington that the government has been addressing the challenges.

“We’ve given them a non-paper dossier on the latest on RAB and its performance, also some of our initiatives. They’ll take it back and look at it,” said the foreign secretary.

He said they will continue their discussion in several formats and this issue will hopefully be resolved in due course.

“We also had in-depth discussion on ways and means of enhancing trade and investment, and possible cooperation in the Blue Economy,” he said.

At the dialogue the two countries intended to have “closer understanding” and broader relations removing gaps.

Earlier, Momen and Nuland had tete-a-tete at the same venue before joining the dialogue.