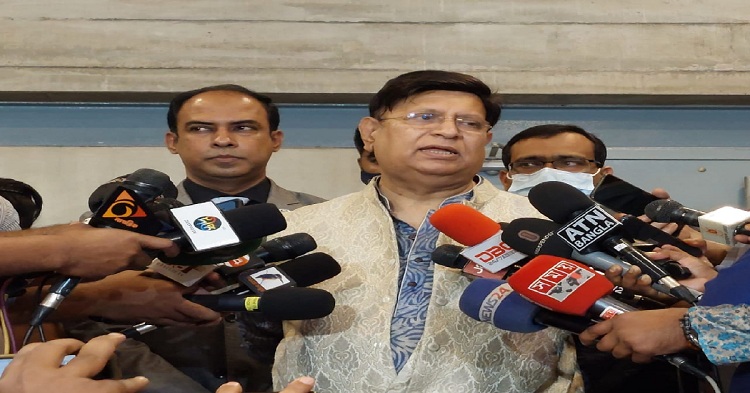 Foreign Minister AK Abdul Momen on Friday defended its voting in favour of the latest resolution adopted by the UN General Assembly on the humanitarian situation in Ukraine, saying Bangladesh remains very vocal on humanitarian issues.

“We voted on humanitarian grounds. We’re known as a humane country in the world. We remain very vocal on humanitarian issues. So, we agreed and voted in favour of the resolution,” he told reporters after attending a function in the city, reports UNB.

Momen referred to Prime Minister Sheikh Hasina’s generosity in hosting over 1.1 million Rohingyas and said she is now known as ‘mother of humanity.’

Asked why Bangladesh abstained in the previous resolution (March 2), the FM said that one was one-sided in which Russia was accused squarely.

“But war does not take place by one side. You can’t clap in one hand. We felt it was very much partisan and war will not stop with such a resolution. To stop war, both parties need to come forward with equal sincerity,” Momen said.

“We express gratitude to the Bangladeshi side for its neutral position taken despite the enormous external pressure during the said voting,” he said.

The same day, the UNGA overwhelmingly approved a resolution on the humanitarian crisis in Ukraine urging an immediate ceasefire and protection for millions of civilians and the homes, schools and hospitals critical to their survival.

There was loud applause in the assembly chamber as the result of the vote was announced: 140-5 with only Belarus, Syria, North Korea and Eritrea joining Russia in opposing the measure. There were 38 abstentions, including Russian ally China, India, South Africa, Iran and Cuba.

Bangladesh voted in favour of the resolution.

He said Bangladesh does not want to see people’s sufferings and the latest resolution sought people’s welfare.

Asked whether Bangladesh changed its position after the recently held partnership dialogue with the US, the FM replied, no.

Asked about any pressure from any country, Momen said pressure is there but Prime Minister Sheikh Hasina and her government does not bow to any pressure. “You must know it. She’s committed. We’re so happy to have such a leader.”