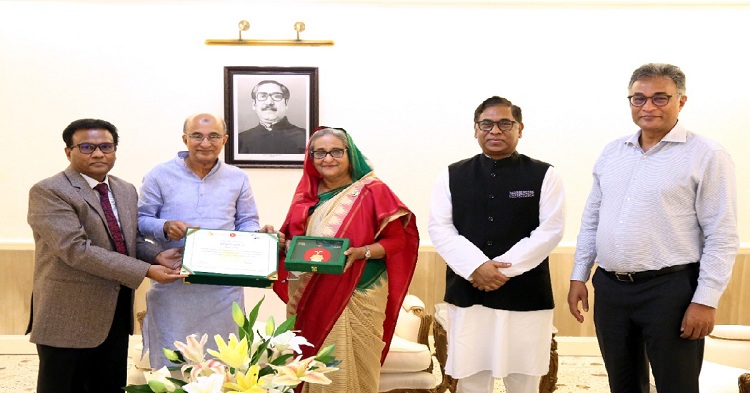 The Independence Award won by the Power Division has been handed over to Prime Minister Sheikh Hasina for her visionary leadership in reaching electricity to every house of the country in the Mujib Year, reports UNB.

The Power Division on Thursday was given the Independence Award-2022, the highest state honour, in recognition of its remarkable success to bring 100 per cent of the country under electricity coverage by increasing the daily power generation capacity to 25,512 MW.

State Minister for Power, Energy and Mineral Resources Nasrul Hamid received the award from the PM at the award-giving ceremony at the Prime Minister’s Office.

Later on Thursday, the state minister handed over the prestigious award (medal and certificate) to the prime minister, who is also in charge of the power, energy and mineral resources ministry, said PM’s Assistant Press Secretary MM Emrul Kayes on Friday.

The power sector officials said it was possible to bring the entire country under electricity coverage thanks to Hasina’s visionary leadership, policy and strategy. “She is the architect of this glorious achievement,” they said.

The prime minister earlier announced that every house of the country will be illuminated in the Mujib Year.

Since taking over the responsibility of the power ministry the PM has directly led the work to accomplish the goal of lighting up every house. So, she deserves this honour, they said.