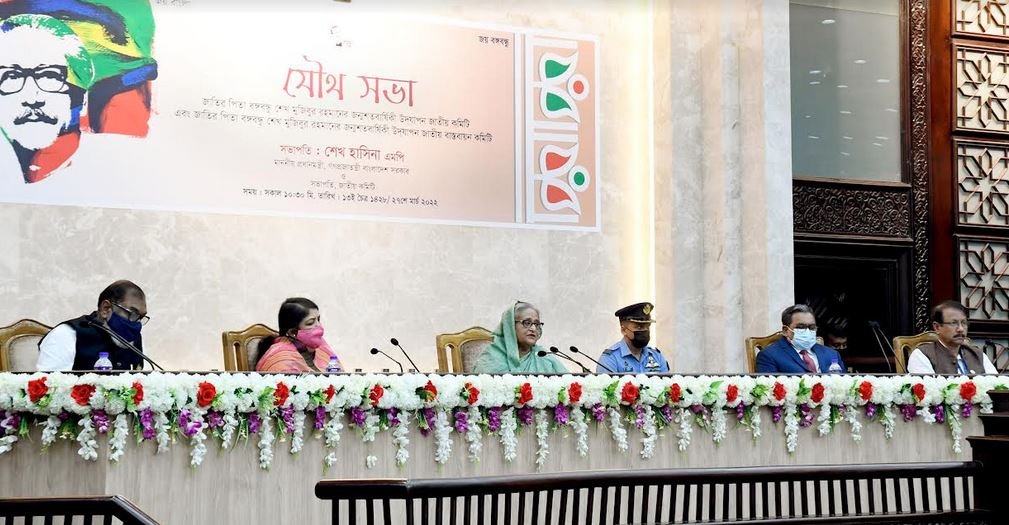 Prime Minister Sheikh Hasina on Sunday said her government is working to build Bangladesh as non-communal country free from hunger and poverty imbued with the spirit of the Liberation War.

“We have one target to bring back the nation to the spirit of the Liberation War and to build the country as non-communal free from poverty and hunger,” she said.

The prime minister said this in a meeting of the National Implementation Committee for Father of the Nation Bangabandhu Sheikh Mujibur Rahman’s Birth Centenary Celebration at Shapla Hall of the Prime Minister’s Office (PMO) in Dhaka, BSS reports.

Sheikh Hasina, also the chairman of the implementation committee, said Bangladesh had gone far away from the spirit of the Liberation War after killing of the Father of the Nation along with most of his family members on August 15, 1975.

“It was an attack on the entire Bangalee nation,” she said, adding that Bangabandhu had dedicated her whole life to liberate the people and gave them a beautiful and improved life.

The prime minister said they have brought the country under cent percent electrification and have been making houses for every homeless and landless people.

“The day is not far when not a single person will be left without address or homeless and landless. We are creating a scope for their survival,” she said.

The prime minister reiterated her vow to continue the indomitable pace of the country’s development.

Sheikh Hasina said she has a plan to build a separate library basically e- library on Bangabandhu’s 32 no house in Dhanmondi on a large scale.

That library will be established so all across the globe have access to the library to study and conduct research on the available documents to be preserved in it, she added.

In this regard, she said a small library now remains in the 32 no house. The premier stressed the need for making digitised all the documents including various publications, books, films, short films, documentaries on the Liberation War and the architect of independent Bangladesh aimed at preserving those.

Referring to establishing Muktijoddha Complex in each upazila having a mini museum, she said that these are mainly built as none can destroy the history of the Liberation War.

The prime minister also advocated for disseminating the history of the Liberation War at the grassroots.

Referring to building a military museum, Toshakhana Museum and an underground museum at Suhrawardi Udyan, she said the government is doing everything possible to preserve the history of the Liberation War for generation after generation.

Sheikh Hasina said her government has a plan to modernise the national library and build planetarium in each of the division and a cell in the International Mother Language Institute to preserve the history of the Liberation War.

In this connection, she reminded the nation that attempts have been made several times to distort the country’s real history.

The prime minister herself and on behalf of her younger sister Sheikh Rehana thanked the members of both the implementation and national committees to successfully observe the birth centenary celebration of Bangabandhu despite challenges arising out of the Coronavirus pandemic.

She said her government did not able to celebrate Bangabandhu’s birth centenary and golden jubilee of the country’s independence programmes on a large scale due to the Covid-19 aimed at saving the lives of the people.

But, many programmes were held digitally, she said.

The prime minister mourned deaths of her two teachers, Prof Anisuzzaman and Prof Rafiqul Islam, who worked hard for successful celebration of the Father of the Nation’s birth centenary programmes.