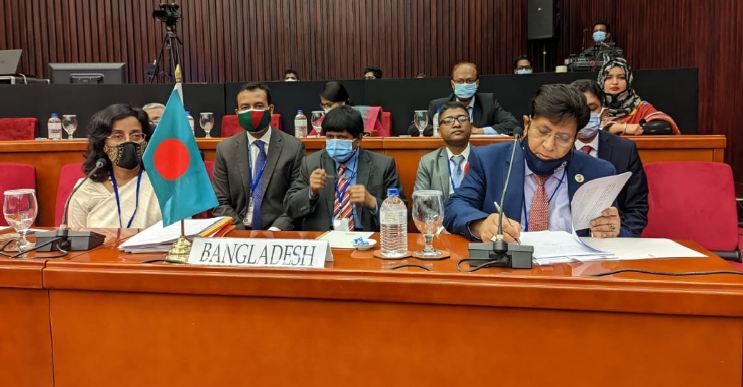 “The 5th BIMSTEC Summit would revitalize the BIMSTEC process with a stronger political commitment and substantive directives and guidance of our leaders to chart the future trajectory of the BIMSTEC towards a higher level,” he said.

Foreign Minister Momen, who led the Bangladesh delegation, was speaking at the eighteenth ministerial meeting of the Bay of Bengal Initiative for Multi-Sectoral Technical and Economic Cooperation (BIMSTEC) in the Sri Lankan capital city on eve of the 5th BIMSTEC Summit scheduled for March 30.

Security and Stability
Momen said Bangladesh is committed to the security and stability of the region within the framework of BIMSTEC Convention on Counter Terrorism and Transnational Crime and annual Consultation Mechanism of BIMSTEC National Security Advisors Forum.

“I am happy to note that our leaders will be approving and watching the signing of the BIMSTEC Convention on Mutual Legal Assistance in Criminal Matters at the 5th BIMSTEC Summit tomorrow (Wednesday),” he said.

The foreign minister said senior officials’ meeting held on Monday recommended some important documents for consideration and onward recommendation to the Summit.

“BIMSTEC Charter is one of them which will place the organization’s activities on a more structured and rule based platform,” Momen said.

Connectivity
Adoption of the BIMSTEC Master Plan on Connectivity will be a milestone development, he said, adding that it will allow BIMSTEC to undertake multi-modal connectivity projects linking the members and facilitating integration in the Bay of Bengal Region.

Once implemented, these agreements will pave the way for enhanced level of BIMSTEC cooperation, he said.

“The technical committees have been working to carry forward the implementation process. I note with happiness the proposed partnership of BIMSTEC with the ADB to formulate a BIMSTEC Master Plan on Grid Connectivity,” he mentioned.

Trade and Investment
The FM said they need to pursue promotion of trade and investment cooperation under BIMSTEC.

Operationalization of BIMSTEC FTA can boost intra-trade volume among the BIMSTEC region to 21% from existing 7%, he said.

Another round of meeting scheduled in April is expected to finalize the two documents.

“Once adopted, tariff free trade can start operation. We need to expedite the process together,” the Foreign Minister said.

The progress made in Trade and Investment, Transport Connectivity and Energy Sector, the three core driving force of BIMSTEC Cooperation, are indeed noteworthy, Minister Momen said.

He highlighted the importance of pursuing common projects, programmes of action and activities by sharing of member states’ resources, best practices, for collective benefits.

Highlighting Bangladesh’s progress in various areas, he said the country fulfilled 8 out 17 SDGs. “We are now on the right track to achieve other goals of Agenda 2030.”

He informed the meeting that Bangladesh managed the COVID 19 crisis successfully and vaccinated maximum of its populations.

“Our foreign currency reserve is almost closer to US $ 50 billion. We are now ready to address the Post-Graduation and Post-COVID 19 challenges. We want to leverage the BIMSTEC platform towards achieving these goals and objectives,” Momen said.

Sri Lanka is hosting the 5th BIMSTEC Summit in hybrid mode with the theme “BIMSTEC-Towards a Resilient Region, Prosperous Economies and Healthy Peoples.”