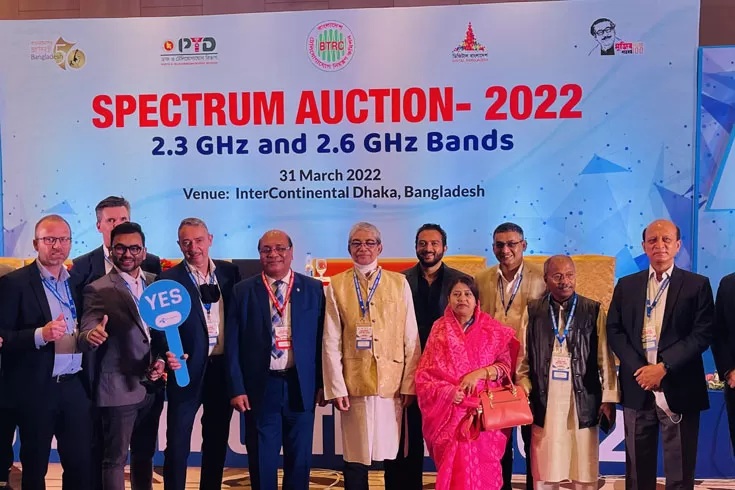 The government has earned around $1.24 billion or Tk 10,646 crore from the auction by selling 190 MHz spectrum which support 4G and 5G networks.

The leading telecom companies in the country — Grameenphone, Robi, Banglalink and Teletalk – took part in the auction.

Taking part in the auction, Grameenphone and Robi have acquired the maximum with 60MHz spectrum each from 2.6GHz bands for about Tk 3,360 crore each followed by Banglalink and Teletalk who bought 40MHz and 30MHz respectively.

It was the largest spectrum auction in Bangladesh’s history.

Currently, consumers are able to use 4G services and the launching of 5G will significantly increase internet speed.

Previously on December 12, Teletalk carried out test operations for 5G. BTRC allotted 60MHz of the spectrum from 3.5GH on a refundable condition for the trial.

With this acquisition, Grameenphone now holds the top position in all bands with 107.4MHz spectrum.

Operators have to pay 10% of the total purchase price within 60 days of the announcement of the final auction results, while the remaining 90% will be paid off in equal installments over 9 years.

In a notice published by BTRC on March 3, the regulatory body had instructed all telecom operators to begin test runs for the 5G spectrum within six months of the auction.

Grameenphone said in a statement that it was committed to giving its users the ‘best possible experience’ through the acquisition and thanked the government for running the auction.

“As we roll out the new spectrum, customers will enjoy improved 4G experience. 4G technology will continue to be the primary technology enabling Bangladesh to reach its full digital potential. Looking to the future, through this spectrum acquisition, Grameenphone has demonstrated its commitment to building on its technology leadership by testing 5G,” Grameenphone CEO Yasir Azman said.