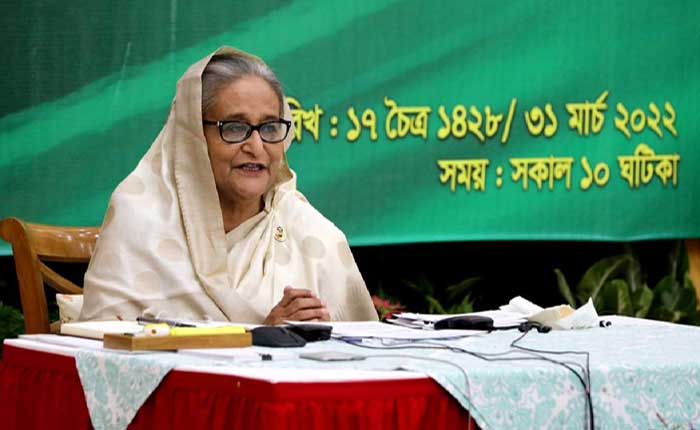 Prime Minister Sheikh Hasina on Thursday said that her government had been able to end the culture of injustice in the country established by a military ruler because of people’s mandate.

She said this while inaugurating the 12-storied building of Bangladesh Supreme Court Bijoy 71, joining it through video link. The programme was held at the Supreme Court premises, reports UNB.

She said military ruler Ziaur Rahman had established the culture of injustice in the country after the assassination of the Father of the Nation Bangabandhu Sheikh Mujibur Rahman.

It was continued successfully by his wife Khaleda Zia, a former prime minister, she said.

The prime minister said that she could end this culture of impunity and injustice because her Awami League party got the popular mandate to run the country.

“We had been able to do it on the strength of the popular mandate,” she said.

The PM said she and her government had faced many obstacles in restoring the culture of justice in the country.

She mentioned that after August 15 tragedy the then-government promulgated the now-repealed Indemnity Ordinance to save the killers.

“By this, the killers were rewarded with jobs in the country’s missions abroad,” she recalled.

She also said that the killers were allowed to do politics in the country and continue their conspiracy against Bangladesh and the values of the War of Liberation.

“The trial of war criminals was stopped and the trial in the seven-murder case was halted and they (the accused) were freed and given chance to do politics,” she said.

In this connection she said that Zia had started the process which was followed by his wife Khaleda.

“They rewarded the killers of the Father of the Nation, war criminals, killers of women and children. They destroyed the spirit and values of the Liberation War,” she said.

The prime minister praised the Judiciary for the historic move to declare all past military take-overs of the state power and their regimes illegal.

“I think by this verdict the democratic rights of the people of Bangladesh were well protected,” she said.